Dog Flu Virus Spreading Across The United States : Shots - Health News One strain of dog flu causing outbreaks in the U.S. appears to be especially contagious, making it likely more dogs than usual will get sick, veterinarians say. Still, 90 percent of cases are mild. 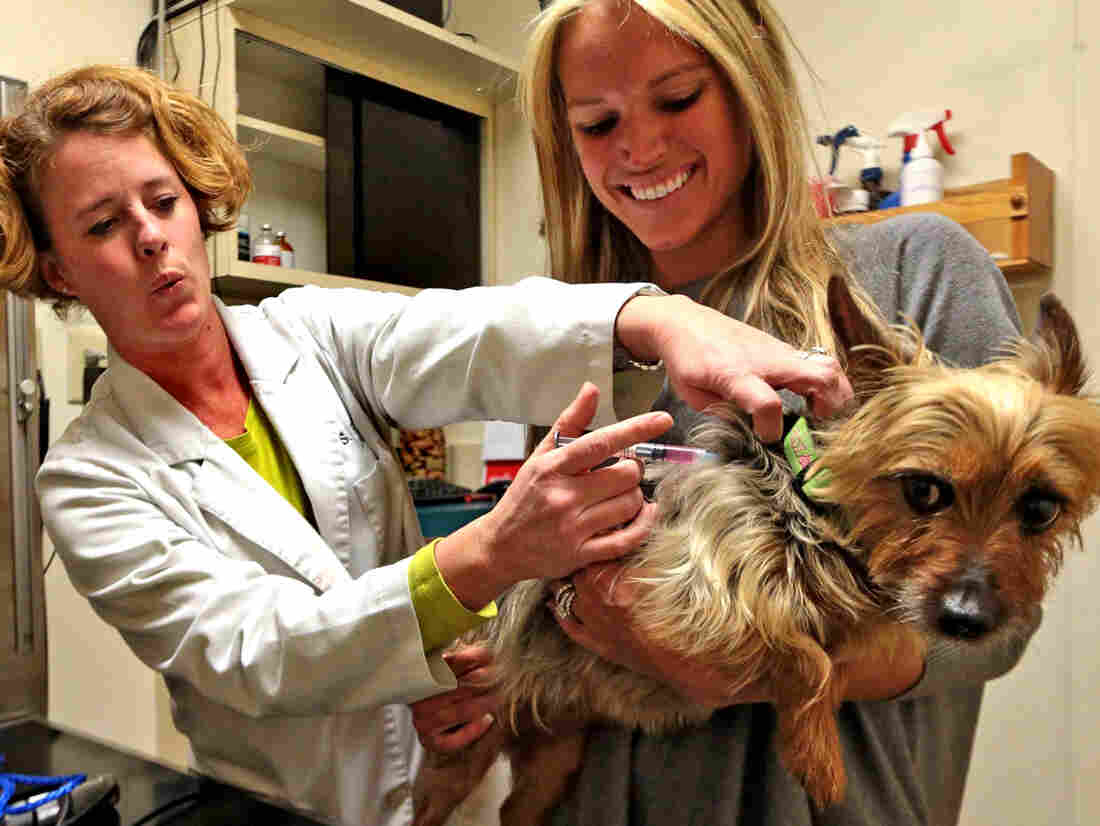 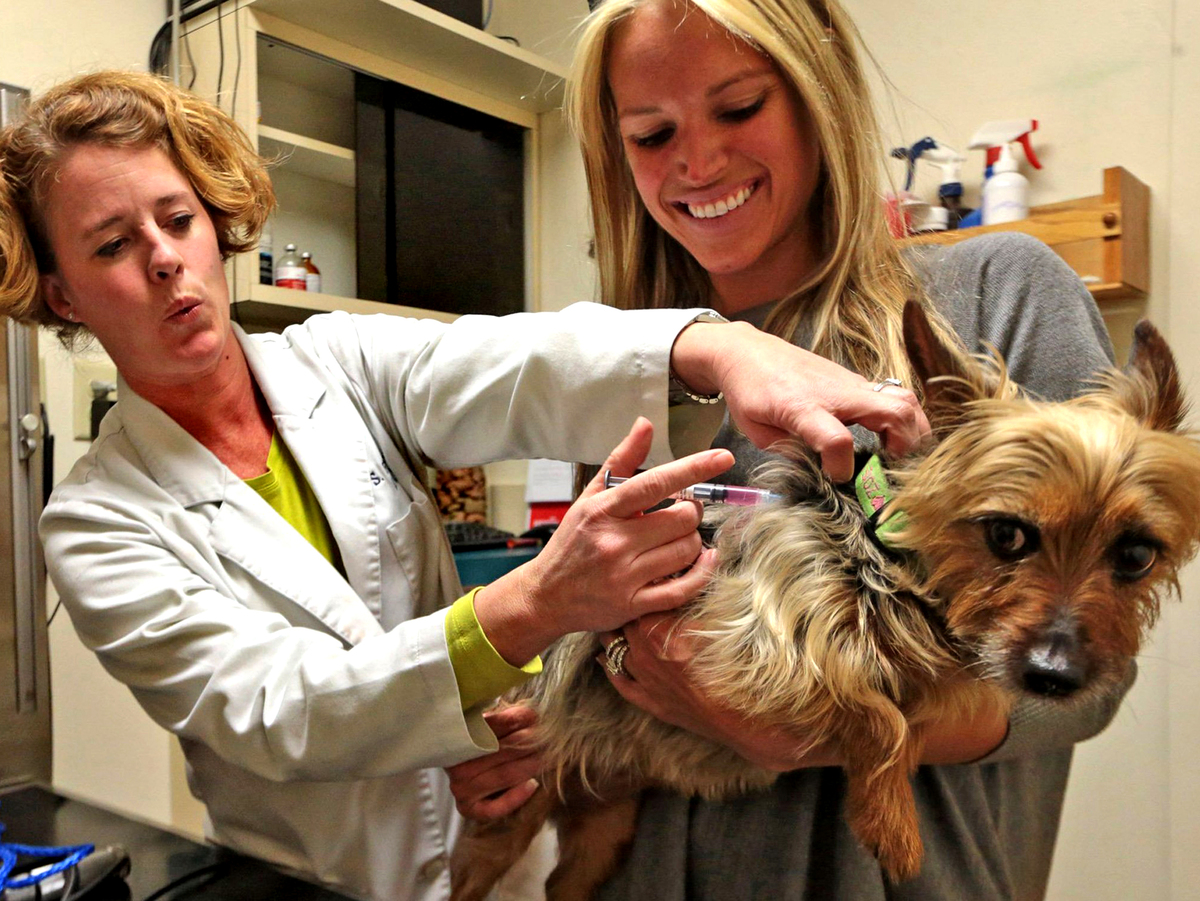 When Elizabeth Estes's dog, Ollie, started coughing last year, she didn't think he was seriously ill at first. But then the 3-year-old Jack Russell-chihuahua mix got much worse.

Ollie, it turned out, had caught a strain of dog flu that's relatively new to the U.S — canine influenza H3N2. The virus arrived from Korea last spring and has since caused flu outbreaks among dogs in 26 states throughout the nation.

No cases of human infections with the virus have ever been recorded, according to the Centers for Disease Control and Prevention. And H3N2 causes no symptoms or only mild illness in most dogs. But it is triggering some severe cases of canine pneumonia.

The night Ollie got so sick, Estes spent the night on the floor of her steam shower with the dog, and rushed him to a veterinarian as soon as she could the next morning.

"They said, 'When you get to the front of the building, call us because you can't bring the dog in through the lobby. You have to come in through the back door. It's that contagious,' " she says. "So I realized at that point: 'Wait a minute. This is something a little bit more serious than I thought it was.' "

The vet rushed the dog into intensive care. "I was petrified we were going to lose him, and pretty upset," Estes says.

After four days of intravenous fluids, help breathing and antibiotics to prevent complications, Ollie recovered. "He's perfectly fine now. But it was a scary and expensive endeavor — but mostly scary," she says.

Two different strains of dog flu are known to be circulating in the United States; canine influenza H3N2 is believed to have first arrived about a year ago, where it triggered an outbreak of illness among pets in Chicago. The virus apparently was brought into the country through O'Hare International Airport by an infected dog from South Korea.

"Dogs, like people, move all around the world." says Joseph Kinnarney, president of the American Veterinary Medical Association.

H3N2 has since spread to probably thousands of dogs in a number of areas throughout the U.S, Kinnarney says. Most have no symptoms. There have been reports of cats also getting sick from the infection in Korea, but so far that hasn't been reported in the United States.

The virus seems to be spreading much more easily than H3N8, a canine flu strain that has been in the U.S. longer. One reason is that dogs infected with H3N2 remain contagious for about three weeks, even if they have no symptoms; that's about a week longer than usual. Also, Kinnarney says, because the strain is new to the continent, U.S. dogs lack immunity to it.

Mild symptoms of the illness include a cough, loss of appetite and fatigue — these dogs recover on their own. Symptoms of severe illness — more likely in very old or very young dogs, or in dogs with other health problems — include high fevers, breathing problems and complications such as pneumonia.

The American Veterinary Medical Association gets funding for its educational meetings from companies that make the vaccines, but no specific products are promoted at those meetings, an association spokesperson says.

Other virologists and veterinarians say many dogs probably don't need the vaccine, especially animals that live where the virus is not circulating widely. You can check with your vet to see if there have been outbreaks in your area.

"You shouldn't be any more worried [about this strain of dog flu] than any other upper respiratory infection," says Ashley Gallagher, a veterinarian at the Friendship Heights Animal Hospital in Washington, D.C. "It's essentially just another kennel-cough disease."

Though there's no evidence so far that people can catch the virus from the dogs, there's always a chance the virus could mutate and become even more of a threat to dogs, says Edward Dubovi, a veterinary virologist at Cornell University who is tracking the virus. Like any flu virus, "it keeps changing," Dubovi says.

NPR thanks our sponsors