Home Pets Dogs Want a Clone of Your Dog? 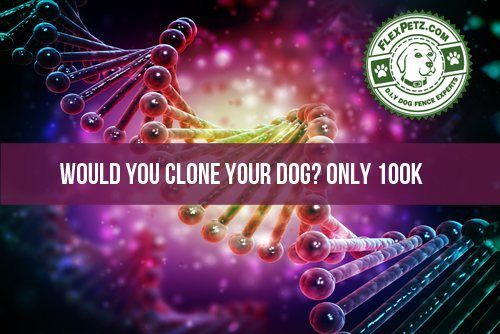 Would you Clone your Dog?

People handle losing their pets in very different manners. Some live their lives as normal, just going on. Others cry for a while, reminiscing about all of the good times they had with the dog. Some others may choose to run out and get a replacement dog. Everyone is different, so there is no right or wrong way to handle it. With that being said, there are some people who are ready to resort to extreme actions to make up for their loss: people who have their dog cloned. There is a controversial biotech laboratory located in South Korea named Sooam that is willing to take care of this task for you. All you need to do is pay them $100 K and they will clone your dog for you. They have been doing this since 2006. This lab was created by a veterinarian and researcher named Woo Suk Hwang.

Is it for Real?

The actions of Hwang himself are a bit scandalous. He was visibly dishonored and barred from his school for concocting research on human embryo cloning and he still faces criminal charges for it. However, this has not stopped people from coming to him for help. Since the organization began, they have cloned more than 400 dogs for paying customers. They usually take in about 15 clients a month. The organization has been working in the United States and soon will be offering cloning in the UK as well. The method of cloning that the Sooam scientists utilize is the same technique that produced Dolly the Sheep, in 1996. It is called nuclear transfer, and it has been around for 50 years. To begin the process the cells are extracted from the pet that you want cloned, and the nucleus of the cell is removed and set aside. The nucleus contains all of the pet’s genetic information. Secondly, an egg cell from a donor animal is acquired. The nucleus of this animal becomes replaced by the nucleus of the pet that is being cloned. Next, the egg cell is given a little electric shock to stimulate division. After several days, the embryo is put inside of a surrogate mother. The surrogate doesn’t need to be the same breed, just of a similar size. The client essentially gets an identical twin of their dog, not the same dog of course. It may look slightly different and may have different personality traits. The technique isn’t without risks, however. Many of the dogs are not healthy, so the process needs to be conducted again until they get a healthy dog out of it. Sooam says that they never euthanize any of the unhealthy animals. An aspiring business, Sooam doesn’t want their work to stop with cloning dogs. This company recently signed a deal with Russian scientists to try and clone a wooly mammoth, regardless of the logical argument of ethics about doing so.