Home Dogs Behavior Solutions How to Use Rewards with Dogs 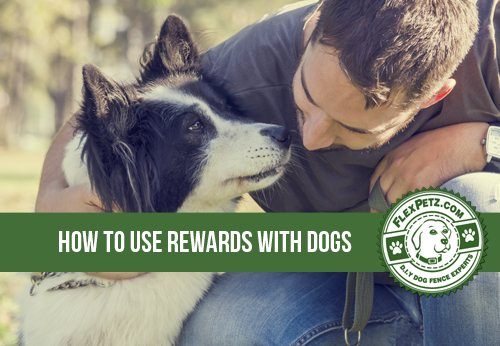 One effective way to reward your dog is with what is known as a reward marker. This is a way of communicating with your dog the exact moment that they do something right. A reward marker is a sound that is made before the dog receives the treat. This sound can be made with a clicker, in what is known as clicker training. Clickers are beneficial as they are easily heard by most dogs. With practice, precise timing can be easily communicated. It is a distinguishable sound that is not likely to be confused with background noise. Be aware that a clicker may be too loud for some dogs such as puppies and they may be scared by them. Getting a clicker with volume control is helpful. You don’t necessarily need a clicker in order to create a reward marker. You can just pick a word of your choice that you do not normally use. Some examples are “yay” or “yes.” You can also use a whistle. There are some rules when it comes to reward markers. The first is that you need to say the word or make the click as soon as the dog does the desired behavior. The more you do this, the earlier your dog will learn that he has done what you wanted him to. The second is that you must reward the dog with a treat every time that you sound the reward marker. When you don’t feed, it weakens the idea of the click so that your dog is not as likely to learn from it. You don’t want to confuse your dog. The third rule is that you don’t want to move your hand toward the treat before you make the sound. This is so that you will not distract him from listening for the click. There are two things that you need to know when training your dog. They are engagement and generalization. Engagement means that your dog wants to be with you and wants what you have, such as a piece of food or praise. You must have engagement so that you don’t have to force your dog to do what you want it to do. Engagement is how a dog pays attention and follows a command. Generalization means that once a dog has learned the meaning of a command, he will perform it in any location and under a distraction. For example, when a dog has not yet generalized a command, they can teach their dog a command in the kitchen and when they try to have their dog do it in the living room it does not work. Another example is where a dog will sit anywhere in the house but will not sit when company comes over. This is where marker or clicker training comes in. It gives a dog trainer a language which allows him to communicate with the dog as soon as he does something that he likes. It is a means of positive reinforcement that tells the dog you like exactly what he is doing and that you want him to continue doing that thing right now. When a dog performs a behavior that you like, he receives a reward that makes him feel good, which gives him a level of comfort. What about when you tell your dog to sit and he lies down instead? You can conduct what is known as a no reward marker. This a word or a sound that you make when your dog chooses the wrong behavior in a training session. Simply say “no” or “ah-ah” to the dog. There is a bit of debate whether a no reward marker is beneficial for your dog. This is because it is considered negative reinforcement. However the idea is that it is a totally neutral signal to let the dog know that there will be no reward for the behavior he just performed. If you are consistent and your dog is experienced at learning through clicker training, it is possible that a no-reward marker may help him.