Home Animal News and Tips Having Pets Sleep in Your Bed 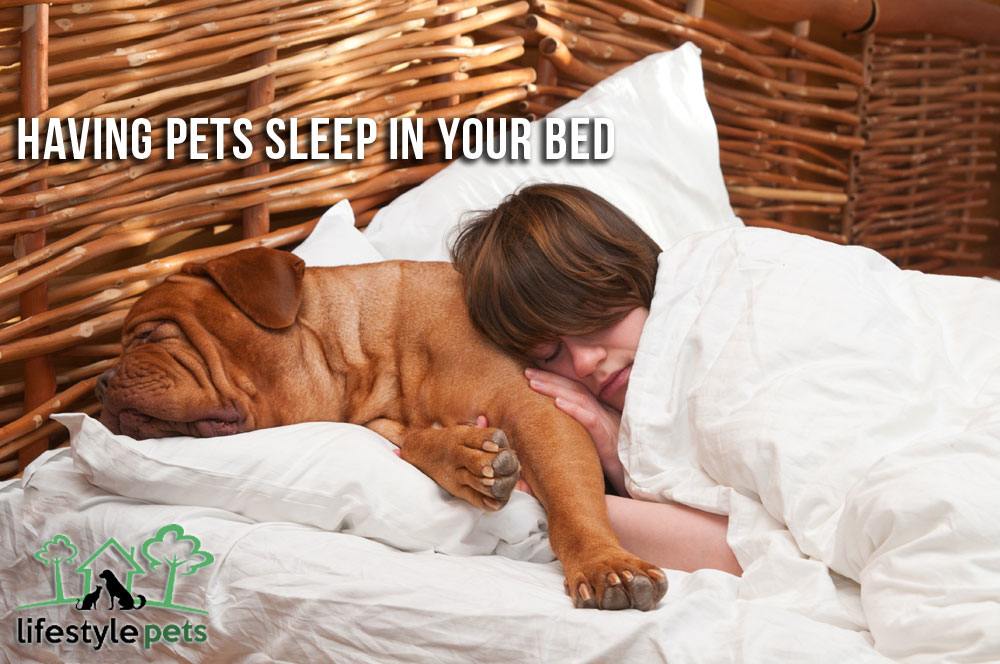 Do you let Fido sleep next to you in your bed at night? Well, you are not alone. According to a Harris poll in 2012, around 70% of dogs and cats in the United States share their owner’s bed, at least on occasion. Of these numbers, more cats than dogs are allowed in the bed, more women than men let pets sleep in the bed and more small dogs than large have the privilege.

Well, it depends on who you ask. The first thing to consider is if you suffer from pet allergies or not. According to Derek Damin of Kentuckiana Allergy, Asthma & Immunology in Louisville, KY, says that if you have asthma or are allergic to pet dander, you should never allow pets to sleep in the bed with you, or to even come into the bedroom in the first place. If you are allergic and are unwilling to kick your pet out of the bed, Damin recommends getting allergy shots to build up a tolerance to the pet dander. He also advises the use of a HEPA filter to help the situation.

A Link to Serious Illness?

A 2011 CDC report called Zoonoses in the Bedroom has fueled fear against “public health risks” associated with letting pets sleep in the bed with you. Veterinarians Bruno Chomel and Ben Sun based the report upon their findings. A section of the report states, “Sharing our resting hours with our pets may be a source of psychological comfort, but because pets can bring a wide range of zoonotic pathogens into our environment, sharing is also associated with risks.” The findings of this report, which some experts say is “overblown” and “based on a conglomeration of very rare cases” shows a link between sleeping with pets and diseases that include MRSA, staph infections, Chagas disease, cat-scratch fever and even the plague.

Do people that let their pets sleep with them sleep better or worse because of it? Again, this may depend on who you ask. A study conducted by the Mayo Clinic Sleep Disorders Center questioned people who let their pets sleep with them and found that 53% said their pets disturbed their sleep in some way, every night. Dr. Lisa Shives, Medical Director of Northshore Sleep Medicine Center says that some patients come to her office not understanding why they can’t sleep at night, only to find under close investigation that their pet was the cause. Interestingly enough, Dr. Shives says that she lets her 45-pound dog sleep with her. She says, “Some people might feel safer or calmer with a dog in their bed.” Many people agree that the security and comfort that the pet gives them allows them to fall asleep faster and stay asleep. What does research suggest? The largest study ever undertaken to determine the impact of pets on their owner’s sleep examined the sleep habits of over 13,000 individuals, comparing the sleep patterns of those who slept with their pets versus those who did not. Known as the Sealy Sleep Census, this study showed that the presence of pets in the bed only had a relatively insignificant effect on the sleep of their owners. It found that those who sleep with their pets took 4 minutes longer to fall asleep than the other group. However, those who slept with their pets said they woke up feeling more tired than the other group did.

Do humans and dogs belong in the same bed? The only way to find out for yourself is to weigh the pros and the cons of the situation. If the comfort that your pet gives you outweighs the possibility that they are making you lose sleep, then cuddle up, buttercup.