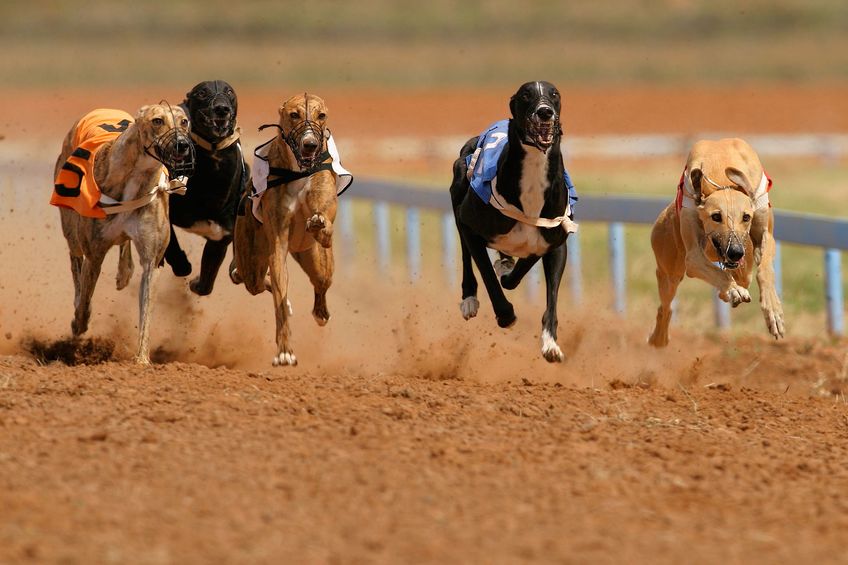 Greyhound dog racing has been a controversial issue for many years in the United States.  Florida was the most recent state to outlaw dog racing.  On November 6th 2018, Amendment 13 passed, which called for all dog racing across the state of Florida to cease their operations by the end of 2020. The sad truth about this sport, which has made a lot of money for a lot of people, is that thousands of Greyhounds are killed every year because they lack winning potential.  Others are killed because they were injured while racing or merely lost their competitive drive.  Some of these injuries range from broken legs and cardiac arrest to spinal cord injuries, paralysis and broken necks. Unfortunately, the track isn’t the only place that these and other injuries can occur. Typically, these racing dogs live their SHORT lives in warehouse style kennels for 2 plus hours per day.  Some are even kept outside in dirt pens with minimal to no shelter.  Due to these deplorable conditions, many dogs suffer from ticks, fleas and internal parasites.  They generally are deprived of human affection and are denied basic veterinary care. Sadly, enough there are still 5 states that have not passed laws to end this terrible sport.  These states are Alabama, Arkansas, Iowa, Texas and West Virginia.  These dogs are usually retired from racing between the ages of 18 months and 5 years old. Outside of the world of racing a normal healthy Greyhound can expect to live for at least 13 years or more. Some of the Statistics, from 2008 to 2015, regarding the deaths and injuries of Greyhound racing dogs are absolutely jaw-dropping. According to Grey 2K USA, there have been 11,722 documented injuries in the sport and 3,000 of those injuries included broken backs, crushed skulls, paralysis, broken legs and electrocutions. Though there are 909 documented deaths, according to the ASPCA. However, it is impossible to know an exact amount of racing related deaths as many dogs are “disposed” of each year when they are no longer competitive or have been injured.  And oddly enough there have been 16 confirmed cases of racing greyhounds testing positive for cocaine. Between 2008 to 2015 over 80,000 young greyhounds entered the racing industry. Knowing that the daily cruelty and all too often deaths of dogs is considered to a reasonable consequence of this legal sport is a national shame and embarrassment to this country.  This sport must end. So many dogs are just discarded like trash. However there is hope for some. Many organizations and shelters have made great strides in their abilities to rescue these racing dogs and foster them out to great families and people who have the ability to provide the love and nourishment these dogs have been denied their whole lives. In order for the laws to be passed in the five remaining states you must reach out to your local and state representatives and if such amendments are up during election time make sure you vote to end this terrible sport. If you would like to learn more about rescuing or adopting these precious animals, please reach out to your local shelters and government agencies.