Home Animal News and Tips Dogs vs Wolves: What Has Changed? 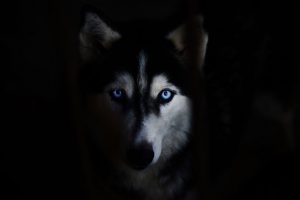 Dogs are a subspecies of wolf – Gray wolf (Canis lupus), if you want to get specific. Along with cats, dogs are the most domesticated breeds of animals in the world. For over 12,000 years, dogs have lived with humans as protectors, hunting companions, and friends. So, what’s changed in all this time? Do dogs resemble their wolf ancestors?

Grey Wolves: Where It All Began

According to Britannica, “The dog evolved from the gray wolf into more than 400 distinct breeds. Human beings have played a major role in creating dogs that fulfill distinct societal needs. Through the most rudimentary form of genetic engineering, dogs were bred to accentuate instincts that were evident from their earliest encounters with humans. Although details about the evolution of dogs are uncertain, the first dogs were hunters with keen senses of sight and smell. Humans developed these instincts and created new breeds as need or desire arose.”

From here, we get the dogs we know and love today, but they only resemble their Gray Wolf ancestors in some ways and differ in others. Here’s what’s changed

But that’s about where the similarities in body shape end.

Dogs have smaller, weaker jaws than wolves. Why? Wolves need to bite and break bone when hunting and eating their raw food. Dogs, who stay near humans, are only required to scavenge. Humans leave lots of scraps and trash behind.

Wolf feet are huge compared to a dog. Their middle toes reach out farther than their side toes. They can use those elongated toes to spring into action and at distances greater than any dog could manage – a feature necessary for hunters.

Dogs vs Wolves Dependence on Humans

It’s no question that dogs depend on humans. Indeed, the cross-species connection is so close that dogs listen to humans for commands and respond to positive reinforcement.

Wolves, however, are much harder to train. Studies have shown that wolves fail to form strong attachments to humans, which limits their ability to train in new behaviors. However, new studies show that it isn’t completely true. While they don’t form dog-like attachments. They show something that resembles attachment, “These results suggest intensive human socialization of a wolf can lead to attachment-like responding to a human caregiver during the first two months of a wolf pup’s life.”

Dogs go into heat multiple times a year. Wolves, however, only breed once per year. February through mid-March is wolf breeding season. Pups join the world around April or May. Wolves have between four and five pups while dogs can have much more.

Dog moms raise their pups on their own. Wolves, however, have a family dynamic. Father dogs are an important part of pup-rearing.

Dogs play for fun! Wolf pups play to learn survival and social skills. According to PetMD, “It teaches them how to hunt; it teaches them how to learn how to discipline a pack member when they become leaders. It helps them learn what their limits are, just like human kids. That social learning is very important so when they grow older, their packs know how to talk to each other and work together and respect each other so they can hunt together and keep the pack healthy.”

Dogs do learn social skills, too, but it’s not crucial to their survival. Humans do a good job mitigating risky social situations for their pets.

Our pet dogs are omnivores. They grew to eat what humans eat: grains, vegetables, meat, and more. They have a constant, steady supply of food in the form of kibble and table scraps.

Wolves may go longer between meals because they are hunters. Catching food is time-consuming and sometimes it fails. They must be able to fast between successful hunting excursions. Wolves also eat more – their bellies can hold 10 to 20 pounds of food. Wolves also eat more protein since they are carnivores, and their GI tract can handle it.

If a dog ate like a wolf, they’d likely become ill.

We Love Our Wolf Descendants

Although so different these days, dogs grew from these amazing creatures through subtle breed differences that changed over the centuries.

We love our tame dogs and their wild ancestors! 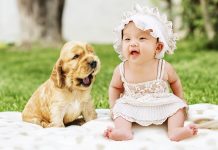 How to Introduce a Dog to a Baby 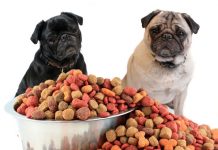 Dyes and Chemicals in Your Dog’s Food: The Colorful Truth