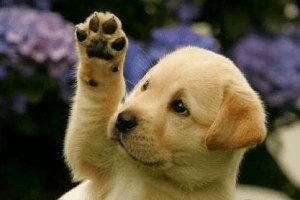 Pawing and scratching is a tactic dogs use to ask for something they want, or as part of play. Pawing is also used to get a person’s immediate attention, like when kids say “mom!” over and over. Humans, however, lack the protective fur covering that dogs have, and claws can cause severe skin injuries. Not only that, a large pawing dog can actually trip someone or knock them over. If your dog has a pawing problem, here are 5 tips to get help your dog learn some polite paw manners. More Exercise Sometimes dogs paw simply because they need more exercise. All dogs are different, but in general, 2-3 vigorous activities like jogging, fetch or dog park time are ideal for keeping your dog calm and happy. Train An Alternative Behavior First try training an alternative behavior. If your dog paws to get your attention or to get a privilege like playing fetch or going outside, interrupt the scratching sequence by asking for one of your dog’s trained behaviors, like sitting, BEFORE your dog reaches to paw your leg or arm. If your dog does not paw and instead does the desired behavior, reward with a training treat or with the privilege, such as going outside. Ignore the Bad Behavior 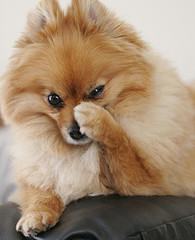 Second, ignore your dog when she paws you. If you have been rewarding your dog with petting or treats for pawing in the past, then teach her that pawing earns her the opposite of what she wants. When your dog paws you, freeze like a statue for 20-30 seconds and avert eye contact. If she persists, get up and walk away. Give attention or treats only when all four paws are on the ground. It’s important to note that when you first start ignoring your dog the pawing is likely to get worse before it gets better. This is called an extinction burst – when your dog tries to paw you with more effort in order to get what she wants. Ignoring the behavior works best if all the members of the family are consistent with Fido. Pawing Ends the Fun When dogs play, they naturally use their paws to touch other dogs. If your dog paws you while you are playing, then teach your dog that the touch of a paw on human skin ends play time for a short period – like 30 seconds. If your dog paws for a toy or a ball, hide the toy for as soon as she paws you, and only bring it back out when the pawing stops. If games like tug o war or chase are too stimulating for your dog, stay away from these games, and keep toys low enough to the ground that your dog doesn’t have to paw to reach them. 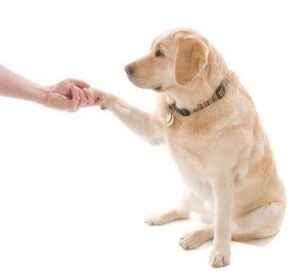 Teach Your Dog to Shake This may sound counter intuitive, but it also helps to teach your dog to shake. When you train your dog to perform an unwanted behavior on cue, that gives you more control over the behavior. It also helps your dog become more aware of her actions and increases the likelihood of it only happening when asked for. Training ‘shake’ with a cue word lets your dog know that she will only be rewarded for the behavior when it is asked for. Shake itself can be a reward when your dog is calm. When she sits nicely you can allow a paw touch to reward her for being so polite – the physical connection itself can be very rewarding. If you don’t seem to be getting anywhere, never hesitate to work with a trainer who utilizes positive reinforcement who can further help you teach your dog proper paw manners. 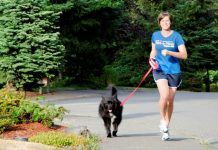 Jogging With Your Dog 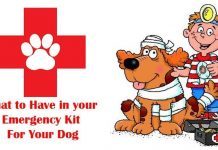 Emergency Items Every Dog Owner Should Have On Hand 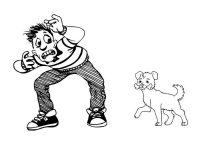