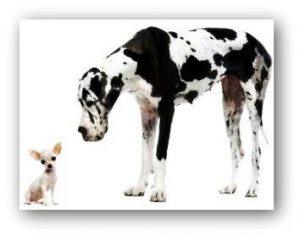 We all know that the experience of having a large dog is different than having a small dog. Practically speaking, when a Great Dane has diarrhea it is (literally) a much bigger deal than a Pomeranian suffering from the same condition. When the 5 pound tea cup poodle doesn’t want to get the car the owner just picks him up; not quite the same simple solution with the 150 pound Irish Wolfhound. Everything costs more with big dogs, from food to medication to bedding. Big dogs are more likely to have problems with joint disease while in comparison, little dogs are more likely to have heart problems, diabetes and dental disease. People play fetch more and are more likely to take big dogs out running and biking. While we know that people treat big dogs differently than little ones, do these variations in height and weight actually account for real variations in behavior between large dogs and small?

One of the most amazing things about canines is the astounding range of sizes and shapes they come in. From Saint Bernards to Chihuahuas and everything in between, the dizzying array of physical variations has happened extraordinarily quickly in terms of evolutionary timescales due to relentless selective breeding by humans. This may surprise you, but as a result of our genetic meddling, the dog is now the physically most diverse land animal on the planet.

Dogs of all shapes and sizes love human interaction, need walks, like to play fetch, are trainable to different degrees and wag their tails or stumps. They also chew on shoes, can be afraid of thunderstorms, can have fear or dominance aggression, bark, dig in the flowers and jump on people.

In general, owners often teach larger dogs behaviors that inhibit impulsiveness and lead to emotional control, such as ‘sit’, ‘down’, and ‘stay’. A tiny Chihuahua that lives in a purse usually does not learn these commands: small dogs may indeed to be perceived to be more excitable because they are not as often taught behaviors that lead to emotional control as big dogs. This is because a 120 pound Newfoundland dancing, leaping and charging around the house is quite a different experience than 6 pound Miniature Pinscher doing the same thing.

An interesting study came out in 2010 that compares the perceptions, behavior, and training of big dogs versus small dogs. The study was based on 1,276 questionnaires completed by pet parents about their perceptions about the behavior of dogs of different sizes. The authors found that smaller dogs (under 40 pounds) are seen as less obedient, more aggressive and excitable…and more anxious and fearful. (Note that this doesn’t mean that they necessarily are, but small dogs are as a rule are perceived to be so.) The researchers also found that owners reported doing significantly less training and play activities with small dogs, and owners of small dogs reported a lower level of consistency in their interactions and enforcement of rules than did those with larger canines. An aggressive Chihuahua doesn’t seem to elicit the same terror as a Doberman with a bad attitude,even though a study found that the average “biter” tended to be a smaller dog. Is it possible that a greater tolerance for aggression in so-called ‘ankle biters’ allow behavioral genetic tendencies to persist? 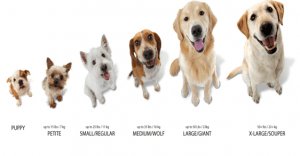 Small dogs can also elicit the ‘awww factor’. Anybody who has seen a Pug puppy knows what I’m talking about. Humans are evolutionary hardwired to find big eyes, small size and proportionally large heads endearing. It is hard to resist an adorable French Bull Dog because those babyish features elicit our care-taking behavior. Some scientists propose that dogs with pronounced baby features (Chihuahuas, Boston Terriers, Pugs, Cavalier King Charles Spaniels, Japanese Chins, Shih Tzus, French Bulldogs, etc.) actually affect our hormones – raising the levels of oxytoxin, which has the nickname of the ‘love hormone’ and is responsible for monogamy in relationships and mothering of newborns. With all that oxytocin-inducing adorableness going on, who can fault pet parents for letting the itty bitty pups get away with more?