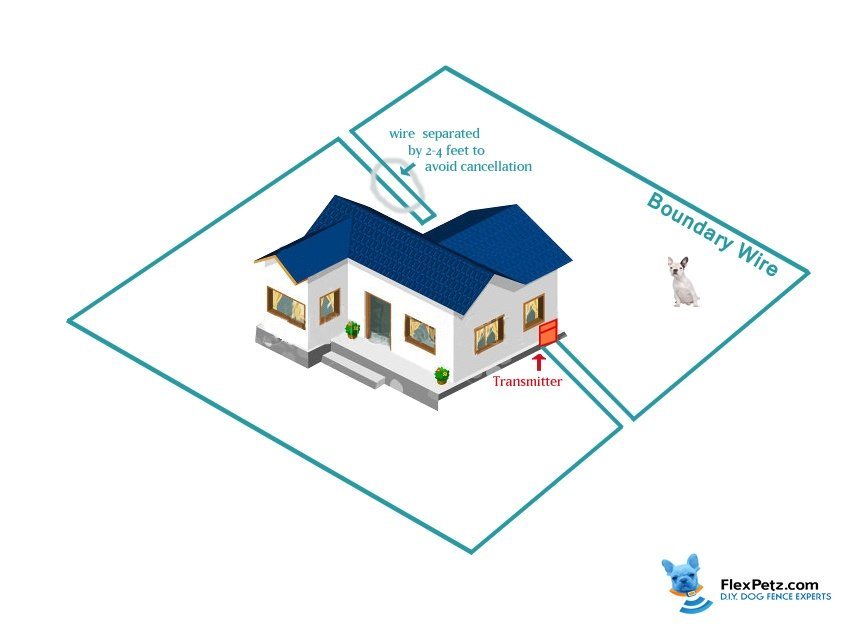 Dog containment fences go by several names, such as electric dog fences or radio fences. They are sometimes referred to as an Invisible Fence®, although this is actually a brand name of underground fencing system. Whatever you call it, a dog containment system works by using three main components. The first is the boundary wire. In an underground system, the wire is buried beneath the ground. In an above-ground system, the wire may be pinned to the top of the earth with ground staples. The wire serves as the physical boundary that your dogs are not allowed to cross. The second component of a wireless fence is a transmitter box. This is a unit that is placed inside of your home or garage. It communicates with the boundary wire. It acts as the main control unit for the dog fence. From the control box, you can set the width of the boundary, which is how far out from the wire the warning and correction will start. Some systems even allow you to set the correction strength at the control box. It will also let you know if the fence is operating correctly by sounding an alarm if there is a break in the dog fence wire. The receiver collar is the final ingredient in an electric dog fence. Your dog wears the receiver collar around their neck. When your dog approaches the boundary zone, he will hear a beep. This is your dog’s first warning to stop going forward. Should he continue going forward, that is when he receives a static correction. The receiver has metal contact points which touch the dog’s neck. The static shock is delivered through these contact points. There are also wireless dog fences available. There are several differences with these systems, however. The signal is cast in the form of a circle, which means you are unable to control the specific boundaries, in the same way that you would with the underground dog fence. However, you are able to control the size of the circle cast by the signal. A wireless dog fence also has limitations that make it not a viable option that works for every house.

A dog learns not to exit the boundary because he experiences negative consequences for trying to do so. After a week or so, the dog will become accustomed to the idea. The boundary flags serve as visual markers, reminding the dog that this is the line that he cannot cross. The idea becomes that the dog will automatically stop when he hears the beep, and that the static correction becomes unnecessary. One might wonder why electric dog fences are so successful. Some think that dog fences imitate the boundaries a dog has in the natural world. Ancestors of domestic dogs were nomads, but boundaries did exist. These boundaries were set by natural land features such as waterways, or were set by the smell of different animals. The wild dog then learns where it is safe to roam and where it is not safe to. The domestic dog lacks these natural boundaries. The dog does not realize that it is not okay for him to go outside of your yard or into the street. The dog fence provides this boundary. It shows your dog which area is their territory and shows them that if they leave, there will be consequences. You may be surprised to see the change in your dogs when they know where their boundaries are. Some dogs that were running around acting wild, digging under the traditional fence or running out of open doors seem to really turn around. They suddenly become content in their own territory. The dog seems to be at peace, not worrying about what is outside of their boundary, almost like they don’t even see them. Some think that dogs need these boundaries and that a dog fence gives this to them.