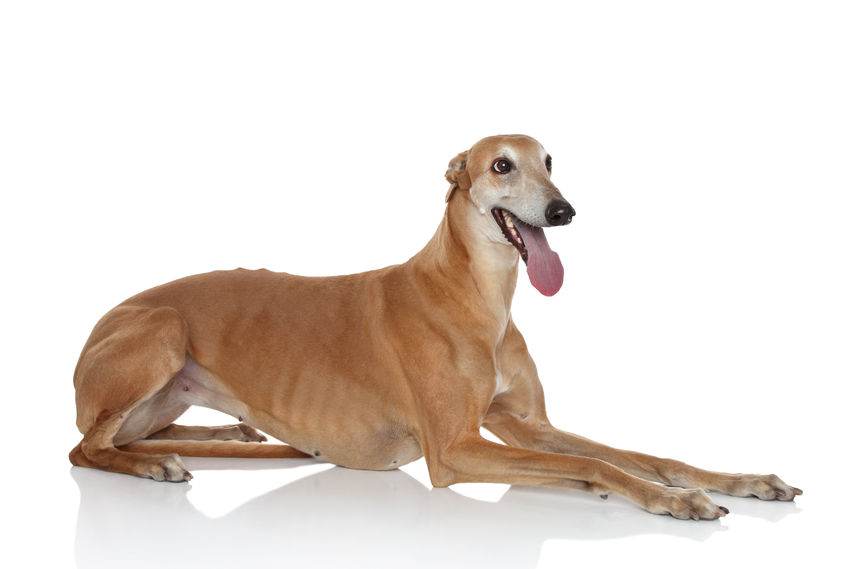 The Greyhound dog was originally a hunting dog that chased hares, deer, and foxes. This dog can run at speeds of forty to forty five miles an hour which is about as fast the Patriots figure out new ways to cheat and the Boston Red Sox figure out new ways to be their archrival Yankees. Moreover, that’s why they are also called the Ferraris of the canine world.

The Greyhound has also acquired a reputation as a racing dog and bets are still placed on Greyhound races today. They are also eager participants in other dog events like conformation, lure coursing, agility, and obedience. What endear them to people, moreover is their sweet and mild nature.

The Greyhound dog is known for its sleek and athletic build which is the opposite of Wight Goodman at the end of Dodgeball when he was not too happy with Chuck Norris! The Racing Greyhound is usually 25 – 29” tall, while the Show Greyhound is larger – between 26” – 30” in height. The male typically weighs 65 – 85 pounds while females tip 50 – 65 pounds on the scale.

Known for their wonderful and even temperament, Greyhounds are by and large non-aggressive and friendly. However, they can also be aloof towards strangers. A treat, however, works wonders to make them friends for life. Their character is marked by intelligence and a sense of acute independence and their sensitivity makes them restless to tensions at home. Mistreatment can often lead to a Greyhound becoming shy and/or excessively timid.

Of course, the Greyhound’s temperament is also affected by other factors like heredity, socialization, and training. Puppies with a friendly temperament are generally playful and curious and are ever willing to approach strangers and to be held and cuddled by them. Anyone who mistreats an animal should be mistreated as well. It is atrocious how the Chinese treat dogs and even other animals but that is another topic!

That’s why when selecting your Greyhound pup, select a middle-of-the-road one and not something that’s aggressive towards its littermates or seems to be excessively shy. Also ensure that you check out its mother’s temperament because it usually affects the litter.

The Greyhound requires early socialization. Expose it to different people, sounds, sights and experiences, in its puppy stage. This would ensure that your Greyhound pup will grow up to be a well-behaved dog. If need be, get him into a puppy kindergarten or take him out to busy parks and stores so that he meets people and polishes his social skills.

Surprisingly, Greyhounds are not high energy dogs. Even then, they like to take a daily walk. Exercise is necessary and lack of it tends to make them bored and turn, which may lead to destructive behavior.

Greyhound have the inborn instinct to chase people and animals and, therefore, need to be kept in enclosed areas to prevent them from taking off. Electronic fencing, however, is not advisable as their strong desire to always chase may result in accidents. You also need to keep them on a tight leash during walks because they tend to disobey commands if something interesting catches their attention and their speed can easily outdistance you and they may get lost also.

They could also get hit by a car so keeping them on a leash is essential.

Obesity is harmful for a Greyhound’s health just like it is for human beings (and child obesity is even worse butt this is another subject) and at best it can be allowed an extra five pounds. Because of his height, he’s best fed on raised dishes to make his eating more comfortable. Training should be started when they are puppies because they can be stubborn and look at training rather indifferently. Which is the opposite on how Homer Simpson looks at some donuts – he looks at them with serious focus!

The food intake should be 2.5 – 4 cups of high-protein, high-quality dog food for males and 1.5 – 3 cups for females, twice daily. They should be treated well just like you treat yourself.