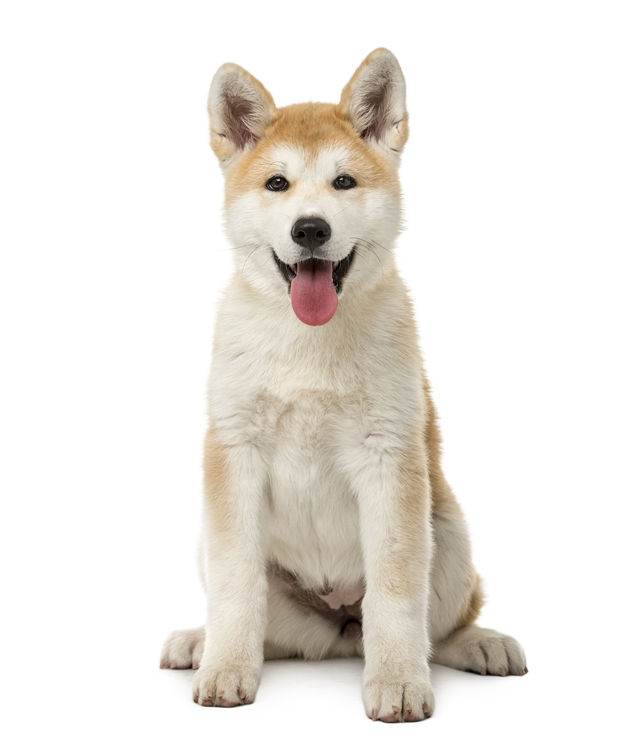 A powerful and large dog, the Akita, with its perpetual frown has a somewhat intimidating yet noble presence. Originally used as guard dogs for the nobility in Japan, the Akita also functioned as a tracking and hunting dog during black bear, wild boar, and deer hunts.

Both loyal and fearless, neither does the Akita back down from challenging situations nor frighten easily. Yet it is respectful, affectionate, and amusing.

It’s appearance is marked by a large head that houses small, almost triangular eyes. It’s stance is confident and rugged, making its mere presence a deterrent to anyone with the intention of causing trouble. It’s unfailingly loyal to its owners and is equally affectionate with all family members. The Akita’s general behavioral trend is to keep following you and to serve you for as long as he lives.

Of course, they can be willful, stubborn and vocal, making amusing moans, grunts and mumbles. They are often called “talking dogs” because of their tendency to keep mumbling to themselves but can be silent and aloof with visitors also. Even though he has a natural wariness for strangers, he’ll welcome a houseguest so long as his owners are at home.

Early socialization as a pup is necessary to soften his wariness. However, an Akita will perpetually maintain his dignity and sobriety and won’t be the typical party animal. Moreover, he is a cleanliness freak and will constantly lick his body like cats do. Another feline quality is that he’ll silently stalk his prey before springing into action like a tiger or mountain lion.

Train an Akita well with respect and you’ll get oodles of love and respect in return. He doesn’t take harsh training well. However, patience too, is required because of his inherent stubborn willfulness that can interfere with his training. That’s why doing your homework on how to train him before you bring him home is critical. You better have the right type of furniture and you need to realize this is a very powerful animal to have around. The Akita isn’t simply a breed for a timid master to handle.

The Akita not only loves living with the family but needs his daily exercise, too. An hour’s drill is enough. Because of their high intelligence level, they are best suited to a varied routine. Don’t allow him to get bored or else he’ll turn destructive. Digging, barking, chewing, and aggression are common signs of boredom as is separation anxiety.

The Akita doesn’t like being left alone. They are best kept within securely fenced yards. They also shed a lot and regular combing and brushing are a must. At the puppy stage, they grow very fast and are susceptible to orthopedic disorders. So don’t let the Akita puppy play and run on hard pavements or jump and jog till he’s at least 2 years old and his joints are formed fully.

All puppies want to play and run around and that is essential to raising a healthy dog. You have to let them do this since that is part of the fun of having a dog but be careful about how hard they play on pavement and even hard surfaces in your home.

A low-calorie, high-quality diet prevents them from growing too fast. The ideal recommended daily food dosage is 3 – 5 cups of dry food. If you’re looking for a breed with a royal demeanor, the Akita dog could just be the thing for you. Bring it home, train it well, and watch it develop into a lifelong friend and loyal companion unlike Nina Myers in 24 who turned out to be a traitor and a murderer but that is another topic. Rest assured, your joy will know no bounds.