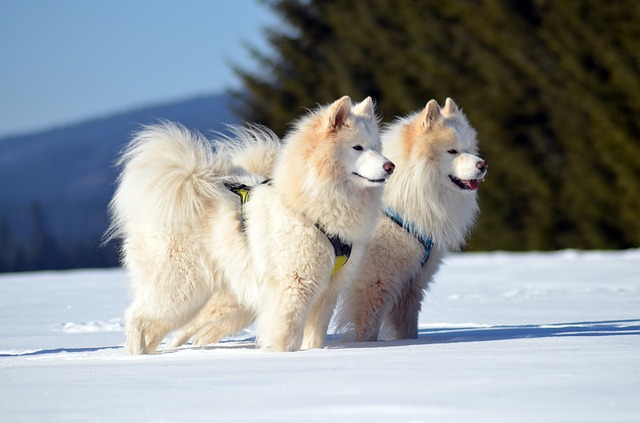 When most people think of Russian dog breeds, they might be able to name one or two. Many dog breeds originated in Russia. The country covers eleven different time zones, so there was certainly enough room for many different breeds to form.

These dog breeds of Russia were all bred for specific purposes and to survive one of the harshest climates in the world. Read below to learn more about Russian dog breeds you may not have heard of before.

Dog enthusiasts might know a few of the dogs on this list. However, most people probably have not heard of many of these breeds. Take a look at these different and fascinating dog breeds from Russia.

One look at the Samoyed’s coat, and you’ll know they came from a cold climate. Their thick coat would keep them warm in even the most northern areas of Russia.

They were used to herd reindeer and for carting. These dogs don’t make excellent guard dogs, however, as they just like people a bit too much. Their herding behavior is strong, though, as they can often be seen trying to keep their family’s children close.

The Russian Spaniel was standardized in 1951. It was the result of breeding the English Cocker Spaniel, English Springer Spaniel, and other spaniel breeds. It looks similar to the Cocker, but it is smaller with a longer body.

The Russian Spaniel is a beloved gundog that has found love in the home as well due to its easy-going nature. They do well with children in the home and are always ready for fun.

This hunting dog comes from Northern Russia and is actually a generic name for many different breeds. Of the nationally recognized different varieties, there are:

The name basically translates to barker, so it usually is applied to several different hunting dogs. 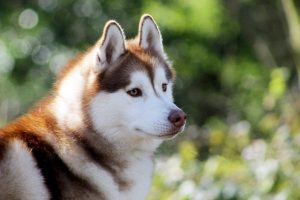 The Siberian Husky is probably one of the most famous dogs of Russian descent. The breed was used for sled pulling and carting. The breed has been confirmed to be one of the most ancient dog breeds and was certainly vital in helping early man survive in the unforgiving Siberian climate.

As the name suggests, the Caucasian Shepherd Dog (CSD) is a dog bred for guarding livestock. Even today, it is still used in the mountainous regions of Transcaucasia. They are used to guard livestock from the treats of wolves, jackals, and bears.

For their size, these dogs are quite healthy. An ideal breed grows to be over 100 pounds. They can suffer from hip dysplasia, obesity, or occasional heart disorders, but the majority of these dogs are somewhat healthy when cared for well.

Many non-Russians call this dog a “Russian Wolfhound.” The Borzoi is a sighthound that is similar in shape to the Greyhound. As Russians more described their dogs than named then, the Borzoi basically translates to a fast dog with a wavy coat.

While they can be described as a “long-haired Greyhound,” they do also resemble the Afgan hound. They have a natural respect for humans but can be rather difficult to train. This is not because they are so independent, but rather that they are likely uninterested in training. Their size does mean that they want space to spread out, so they do best with lots of opportunities for exercise.

The Bolonka is a toy breed that comes from Bichon blood. The dog originated as a gift from Louis XIV of France to the Russian nobility. Later during the Soviet Regime, the dog was bred with other small dogs like the Bichon Frise, Toy Poodle, Shih Tzu, and Pekingese to make small dogs that would be able to live in apartments comfortably. The Soviet Union would not allow the import of foreign dogs, so breeders would make do with what they had.

Once the Soviet Union fell, the dog was allowed to be exported. Most famously, Prince William and Kate Middleton own a Bolonka.

The Black Russian Terrier (BRT) was bred by the USSR for use as a military and working dog. It was initially only available from the Soviet Union’s Red Star Kennel but has more recently been cared for by dog enthusiasts. The dog started being bred during the Second World War with development stock that included the Caucasian Shepherd Dog, Airedale Terrier, Giant Schnauzer, Rottweiler, Newfoundland, among other breeds. The BRT resembles the Airedale Terrier in size and shape but has an entirely black coat. Because these dogs were bred for military and police use, they have a calm and confident manner and are great for protecting children.

The dog breeds of Russia are many and varied. Some were purpose-bred, while others just adapted to living in one of the coldest climates in the world.