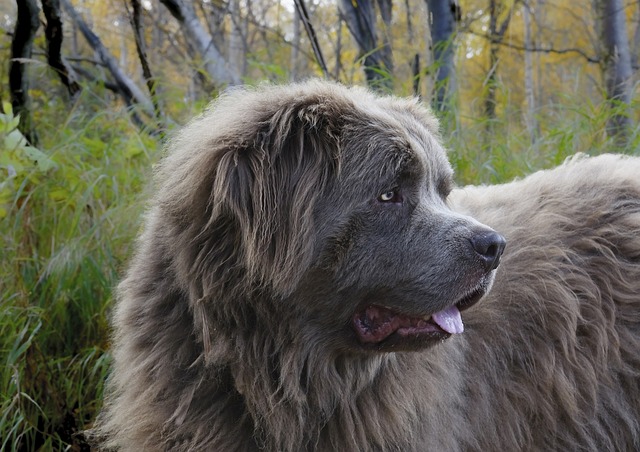 Many breeds we know today come from Canada, most notably the Labrador Retriever. Here are just some of the most popular dog breeds of Canada.

The Canadian Eskimo Dog (CED) traces its lineage back to the movement of people into the Americas. Around 1000 years ago, the Thule people migrated into northern Canada and eventually moved all the way into Greenland. The Thule people are considered the ancestors of the Inuit people. While these people moved across the arctic Canadian landscape, they used arctic dogs to make the journey easier. These dogs are the ancestors of our present-day CED.

The first thing you might notice about the CED is its powerful physique. They grow to be between 40 and 88 pounds and can stand 20 to 28 inches at the shoulder. The breed looks like they were not built for speed, but rather for power.

They look very similar to wolves or other arctic breeds. Their coats are thick to protect them from the freezing cold temperatures. The dense coat is so thick that many CEDs prefer sleeping outside even in the winter. CEDs come in almost every color. Most commonly, they are black, silver, white, or mixtures of these colors. Many even have “socks” on their feet or “masks” on their faces.

The breed is used to bonding with a person for survival, so they develop a fierce loyalty to their owner. They also commonly hunt for their own food, so their prey drive is still very strong. Their exercise requirements are very high, in fact, they need more exercise than most dog owners could possibly give. Most Canadian Eskimo Dogs are taught to pull a cart or sled as soon as possible and by two months of age, they can run with other adult dogs.

Probably the most famous dog breed to come out of Canada, the Labrador Retriever is a breed with a lot going for it. This sporting dog’s ancestor originated in England and became the dog we know today. Labs are fiercely loyal and wonderful with children. In many countries, they are used as disability assistance dogs for those that are blind or autistic – and for good reasons. Labs are intelligent and very trainable. They offer comfort as therapy dogs, as well. On the law enforcement front, they use their strong senses to sniff out drugs and other illegal items.

Labs are medium to large dogs and weight anywhere from 55 to 80 pounds depending on the sex. Dogs come in a variety of coat colors, including black, chocolate, and yellow. These dogs are generally healthy with few health problems to note. However, some have genetic issues such as hip dysplasia and diseases of the eye. A good dog breeder will test for these.

The Newfoundland is a breed of dog that has been captured in many works of art. It’s easy to see why. They have a lush, beautiful coat that can be black, white, brown, or even grey. They are incredibly strong and even have webbed paws to aid in swimming. This is why the Newfoundland has been used for water rescue. Their water-resistant coat makes dealing with water a non-issue, even in their cold homeland.

The dog can grow up to 200 pounds, but the largest recorded weighed in at 260 pounds. For all that size, they are still known for their calm and docile temperament. They are great dogs for families as they love children. Their large size makes them dangerous around very small children simply due to the dog’s mass.

They are also very loyal and aim to please. Give a Newfoundland dog a task, and they can’t wait to help you complete it. This makes them highly trainable and also helps them burn their abundant energy. 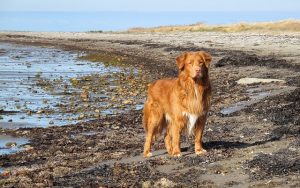 The Nova Scotia Duck Tolling Retriever is considered the smallest retriever, according to the American Kennel Club (AKC). They are about 18 or 19 inches tall at the shoulder. Their coats are a beautiful crimson color with a range from golden to copper. The Toller is athletic and has lots of energy to burn. Therefore, they are used for hunting, swimming, and make great companions to campers and hikers alike.

These dogs are not happy unless you engage them in rigorous exercise for at least an hour a day. According to the AKC, “Because Tollers love to engage and do things with their owners, many owners participate in canine sports such as agility, flyball, or fieldwork to channel the breed’s excess energy. Engaging in these sports has the added benefit of strengthening the bond between owner and Toller.”

When it comes to hunting, which they are bred for, the Toller uses its red coat and energy to startle birds who mistake the dog for a fox. Apparently, waterfowl such as ducks tend to become curious about the movement and move closer to shore. Once the bird is within firing range, the hunter has an opportunity to shoot. Tollers then swim out to retrieve their game and gently return it to the human.

There are other dog breeds that originate in Canada including:

Thanks for taking the time to explore the dog breeds of Canada!