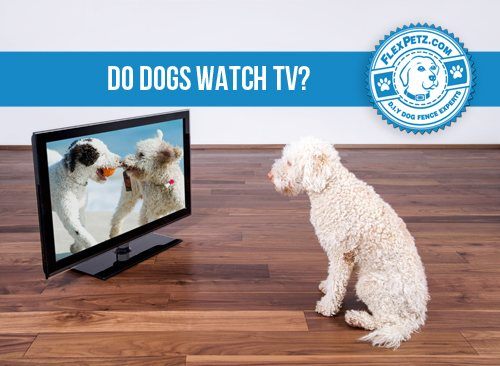 In short, it depends on the dog. What breed a dog is may have an influence on how he reacts to images on the television. For example, hounds which are driven by smell may not care too much about what is visually going on, but herding breeds like terriers may be more interested. Dog owners may commonly leave on a radio or TV when they leave home, in hopes that hearing the sound will be more comforting than hearing the silence. Nicholas Dodman, veterinary behaviorist at Tufts University talks about dogs watching TV when he says, “They orient to things they’re interested in, look at it for a couple of minutes and go ‘hmmm, interesting,’ and then look away. Even so, that’s better than spinning your wheels all day while your owners are away.” Creators of DogTV are banking on the fact that they are going to hold a dog’s interest. This HDTV cable channel, designed for dogs is formatted specifically for dogs to be able to see it better. As it turns out, dogs’ eyes register images quicker than our eyes do. This means that they have to run a much higher number of frames per second in order for the dog to see it as a moving picture. Humans need about 16 to 20 images a second to perceive what is seen as a continuous image where dogs need about 70 images a second. DogTV has also specially adjusted the color on the channel for dogs to be able to perceive it better. Dogs do not see the full range of colors like humans do. Instead, their vision is dichromatic, meaning that they only see two primary colors, yellow and blue.

DogTV features three different types of doggie programming: relaxation, stimulation and exposure. Relaxation mode shows images like dogs hanging out in a grassy field. Stimulation shows scenes likes dogs surfing in Southern California. Exposure shows dogs scenes such as dog reactions to different situations, such as a ringing doorbell or obeying commands. According to pet experts, many dogs will actually follow the movement of objects on the TV screen and may even bark. When dogs hear another dog bark on the TV, they get even more excited. According to Stanley Coren, dog-human relationship expert, placement is another important factor when it comes to dogs watching TV. For example, putting a TV at human eye level is not going to be much benefit for a dog. In order for the dog to investigate and watch, the television would need to be placed on the ground. In addition to this, it turns out that videos that are shot low to the ground and videos with shots of animals will hold a dog’s interest more. Associate Professor at the Norwegian School of Veterinary Science, Ernst Otto Ropstad specializes in animal vision. He says, “No research has been made regarding differences in breeds as regards to how many images per second they need to perceive TV as film.” He says he conducted research on five bird dogs to see their reaction to television. He said that some of the dogs were interested in it while others “couldn’t care less.” Does your dog care about watching the TV? Nicholas Dodman sums it up when he says, “Beyond biology, how dogs react to TV-whether it’s running around, barking excitedly, or just ignoring it- may come down to personality or breed.”