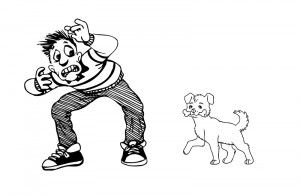 Imagine this scenario: you are walking down the street and see a large, menacing dog with bared teeth headed toward you.  How would you feel?  What if you had been bitten by a dog that looks eerily familiar like the Cujo headed your way right now – what might you feel like then?

Your heart would probably race, you may shake, hyperventilate, or start to sweat. I imagine you would feel a myriad of negative emotions, including fear and panic, and your body would react physically to a surge of hormones, including adrenaline. You probably know that this reaction is called the flight or fight response, and in situations where you are threatened, it is completely normal.

Some people, however, have excessive panic reactions to dogs. Even if the dog is just minding his own business and not doing anything threatening, these people can feel anxious or fearful around canines. At the far end of the spectrum some people are so terrified by dogs that they cannot even talk about dogs without feeling fearful. This irrational fear of dogs is real and actually has a name: cynophobia.

Like most phobias, cynophobia is often caused by a negative experience with a dog, usually during the formative years of childhood, when we form fears in our mind. Imagine an exuberant large breed dog playfully jumping on a small child:  the relative large size of dogs compared to children combined with an over-active imagination and a lack of understanding of canine behavior can grow a full-blown phobia.  People who suffer from cynophobia can live in constant fear and limit their lives as a result.

The fear that people with cynophobia have is very much out of their control because when he or she sees or thinks about a dog, the fear system in autonomic part of their brain takes over. Then the body secretes chemicals that alerts the nervous system and fight or flight system takes over. The threat feels real, so the person treats it as real, even though the perceived threat is not congruent with reality.

Fortunately, some people just grow out of cynophobia as they reach adulthood, and cynophobia responds very well to psychological intervention.’ If you suffer from cynophobia, take heart – you are not alone!  I recommend working with a professional skilled in phobias to help remove the fear and encourage helpful coping skills. With a bit of work and the right assistance, you can overcome cynophobia and learn to enjoy the wonderful companionship of canines! 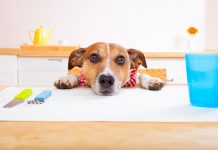 How to Stop Dog Begging 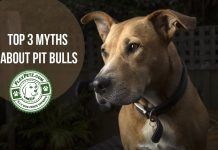 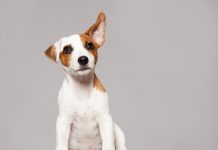