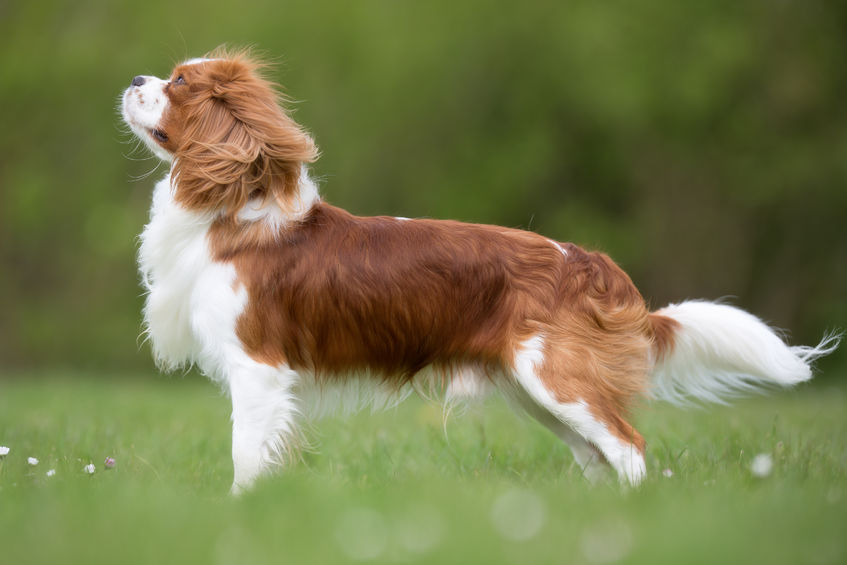 Toy spaniels were bred for the European nobility from all the way back to the Renaissance era. It was said that the King Charles I and his son, Charles the II of the 17th century loved black and tan toy spaniels. These later became known as the Cavalier King Charles. According to the American Kennel Club, “Later in the century, in the age of Victoria, the breed was crossed with Asian toys, probably Pugs and Japanese Chin, and became what is known in America as the English Toy Spaniel (or, in the United Kingdom, the King Charles Spaniel).” Later, this special toy breed nearly went into extinction, but the breed was not forgotten among canine aficionados. Then, in the 1920s, a man named Roswell Eldridge posted a challenge to British breeders: a cash prize would be offered to the breeder that could create, “Blenheim Spaniels of the Old World type.” With the cash prize motivation, the old style was achieved! These dogs were called the Cavalier King Charles Spaniel to commemorate the monarchy. The breed is known by four color patterns: Now that we know about this breed’s interesting history, let’s delve into their personality.

The Cavalier King Charles Spaniel is loving and playful. Generally, they are trusting, easygoing, and just happy to be with their owners. They are the perfect lap dogs. Although they are usually sweet in demeanor, they can be stubborn. Although they have a reputation for being “dumb,” they really are just stubborn. They are not untrainable, but they can be challenging. They respond well to positive reinforcement during training. It’s rare to have a Cavalier King Charles Spaniel that is aggressive toward people or other dogs. Cavaliers need people to be happy. Ideally, they live in a home where people are around the majority of the time. So, homes with a retired owner, stay-at-home parent, or work-at-home situation is best for the Cavalier. We suggest that you start training your dog right away. Don’t wait until they are older to start working on discipline. If your dog is headstrong, this is especially important. Make sure they get many interactions with people and other dogs to ensure proper socialization. That way, you can bring your Cavalier anywhere with you.

Like all dogs, there are certain genetic health, or common health conditions associated with certain breeds. The Cavalier King Charles Spaniel is no different. Common Cavalier health issues:

The Cavalier’s soft, silky coat needs regular brushing and occasional bathing. Brushing keeps the shiny coat. Grooming is a great bonding opportunity between a dog and their owner. Ears should be protected during baths. Check for signs of infection. Nails should also be trimmed monthly.

Is the Cavalier King Charles Spaniel Right for You?

Cavaliers are great for homes with families, dots and even cats (as long as they are socialized early). Pet birds are very attractive to the Cavalier. So, care must be taken. This pup is perfect for homeowners who want a lapdog they can take anywhere dogs are welcome. They need attention, love and social stimulation daily. We can definitely see why the monarchs of old loved this breed!