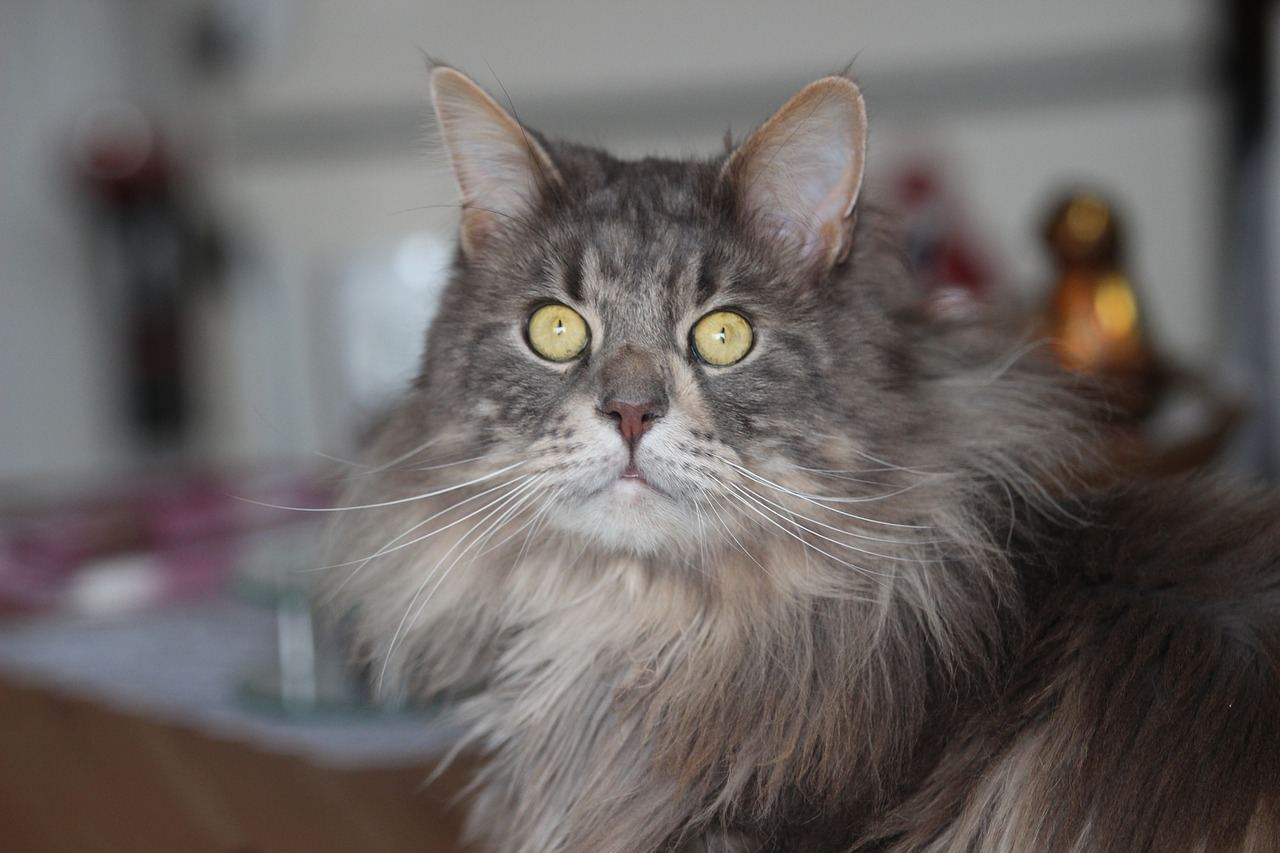 This feline is native to New England and hails from Maine. A popular farm cat, mouser and, in all probability, a ship cat that goes back to the early 19th century, the Maine Coon is a natural breed with very little known about its origins.

Some opine that the Vikings brought them to North America; and some say they are descendants of the longhaired cats that Marie Antoinette kept. According to another school, some long haired cats were brought in by sea captains and subsequently mated with the local shorthaired cats, which resulted in the Maine Coon.

Its lineage, history, and bloodline apart, this big, brown tabby coated and furry ringed tailed cat is among the world’s most popular felines and are acknowledged as the official Maine state cat.

This is one big cat. It weighs between 9 and 18 pounds while males may weigh more than 20 pounds also. They reach full size between the ages of three to five. Yes, they can eat plenty of rodents! They may even eat a bucket of KFC chicken too with the mash potatoes so be careful about that! OK, just joking!

The Maine Coon is affable and good-natured, adapting well to many personalities and lifestyles. He loves people and follows them around, while also enjoying their attention. However, he isn’t a typical lap cat. He’s an excellent mouser and gives no rodent in your home any peace. Yes, that could include your hamster.

Even if they are missing, he’ll hone his mouser skills by chasing toys and grabbing them with his big paws. The Maine Coon is an active cat and enjoys fetch with small toys, balls, toys, or paper balls. He may be a good climber but prefers staying at ground level where he enjoys his puzzle toys. No, he does not want to watch Jurassic World since that movie was a repeat of what we saw in the 90s; even your cat will realize that movie is boring but this is another topic!

Maine Coons usually retain their kittenish love of play well into their adulthood. Males may be prone to a little silly behavior now and then but females are definitely more dignified. Moreover, none of the sexes is vocal and make their appeals in soft chirps or trills. They are not opera singers!

Despite the silky texture of the Maine Coon’s long-haired coat, it doesn’t mat easily if groomed regularly. Combing twice weekly is good enough to eliminate dead hair and to distribute the skin oils evenly. Use a pure stainless steel comb to remove tangles gently and then use a grooming rake to extract the dead undercoat, the main culprit for causing tangles when not removed.

Use the rake gently, particularly in the tail and stomach areas. Otherwise you’ll risk hurting them which they certainly don’t like. Check out the tail for any poop that’s stuck to the fur and wipe it off with a soft baby wipe. Give him a shower based on need and this can range between every few weeks to once in three months. A greasy coat and/or stringy fur calls for a bath.

Oral care is also important and so is nail trimming every few weeks. Wipe the eye corners with a wipe to remove discharge. Check ears weekly and if dirty, wipe them out with a cotton ball or soft damp cloth moistened with a 50-50 mixture of cider vinegar and warm water. Avoid using cotton swabs, which can damage the inner ear. Also keeping the litter box spotlessly clean is critical since cats are very particular about their bathroom hygiene.

Kittens are best fed four times daily with high-quality cat food along with milk, which may gradually be reduced to 2 meals daily as your happy Maine Coon grows older.