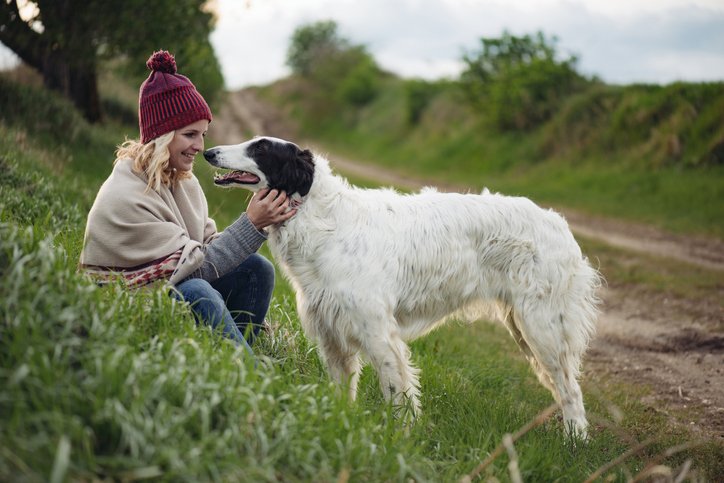 The Borzoi might not be one of the best-known dog breeds, but it is a unique dog with a lot to love. Let’s learn more about this breed’s origins and how it became a household dog.

The Borzoi is a breed that originates from 17th century Russia. Its parentage actually comes from the Arabian sighthound and another breed. The other breed would have been thicker coated. This mix of the sighthound with a thick-coated dog helped the Borzoi adapt to the cold Russian climate.

The dog was originally bred to hunt wolves. Eventually, the breed became popular with Russian nobility and was even a favorite of the Russian Tzars. The dogs would be used for hunting trials. These trials would sometimes last days and were a time of celebration. It was also the time where the best breeding stock would be selected. The dogs who were shown to be the fastest and smartest would be selected to breed.

After the 1917 Russian Revolution, hunting in this manner was associated with the now overthrown monarchy. There were also better and more efficient ways to hunt, so the Borzoi fell out of fashion.

In the 1940s, it was a Soviet soldier who convinced the Soviet government to preserve the legacy of the Borzoi for the purposes of the fur industry. Even with the regulation of Borzoi breeding, very few have been sent out of Russia and even today the Borzoi is a less known breed outside of Russia.

Borzois are large Russian sighthounds and almost resemble a Greyhound with thick, shaggy fur. They can come in a number of different colors like black, white, red, brown, grey, and any combination thereof. Their fur is silky and usually a bit wavy. These dogs are large. An average male Borzoi can weigh up to 100 pounds and stand thirty inches tall at the shoulder.

Borzoi dogs are meant to run and hunt. They are swift, and under their thick coat is a streamlined body. They very much take after the Greyhound in build and use that to their advantage to chase prey.

The Borzoi is a rather stout breed and they do not suffer from many health issues. If you are considering a Borzoi, the breed does sometimes become affected by the following diseases:

Bloat is an issue that is known in many deep-chested breeds, though it is thought it can be mitigated by raising the dog’s food and water bowl. Otherwise, heart issues and blindness can occur with the Borzoi, though these issues are usually rare.

Grooming the Borzoi is about what you would expect from a dog with a similar coat. They do shed, so they should be brushed every day or so with a slicker brush to remove any loose hair. They do also have a shedding period about once per year. During this time, you should brush at least each day to ensure you don’t have any tumbleweeds rolling around your home.

You should also trim the dog’s nails as necessary. The breed is very active, so their nails can wear down naturally. Lastly, their teeth should be brushed at least each week.

The Borzoi is a speedy hunter, though they are not going to be a great guard dog. They are very independent and sensitive dogs, and they have a natural respect for people.

While the breed is intelligent, they may not always be the most obedient. Their intelligence lets them distinguish between what they think are meaningful and pointless tasks. This is a trait that makes the Borzoi seem less reliable or stubborn.

In truth, the dog was bred to hunt. This hunting usually occurred when they were released to chase their prey. So, most of their hunting was done out of sight of humans. This has led to the very independent nature of the Borzoi. They are also open to guidance from people, but they will quickly grow bored with repetitive tasks. Though, the Borzoi has also been shown to perform very well in competitive obedience training.

The Borzoi has a very independent and aloof breed. This means they might not be the best breed in a house with small children. The erratic and loud nature of small children can make a Borzoi nervous.

The Borzoi is a very interesting breed that can be a wonderful companion. Their independent nature makes them almost cat-like; however, they bond strongly with those they truly care for.