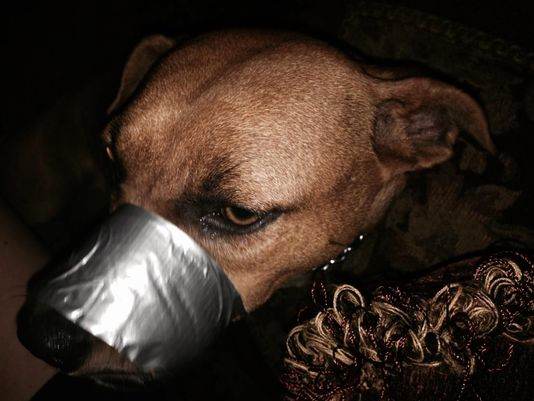 Police in North Carolina have reported that a woman in their state taped her dog’s mouth shut with duct tape to make it stop barking. Kimberly Ann Howell, 25, of Salisbury, N.C. has been charged with animal cruelty in this case. Not only did she admit to doing this to her dog, she bragged about it on Facebook. On September 28th of this year, Howell took pictures of the dog and posted them on Facebook. She must have thought it was funny, as she posted “hah hah” below them, according to the Rowan County Sherriff’s Office. 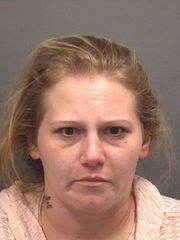 These pictures got noticed right away. After receiving “harassing comments via Facebook,” Howell removed the photos she had posted online, but not soon enough as she hoped. Someone reported the pictures to the police. Local investigators then went to Howell’s home to check on the welfare of the animal. According to Howell, she thought it would be a funny “joke” to do this to her dog and take pictures. She claims that she only put the tape on long enough to take the pictures, and that she removed it immediately afterwards. Ryan Barkley, who investigated the incident says that the mixed breed dog did not have any injuries or signs of neglect and appeared to be in good health. According to a police statement, Howell was arrested on a misdemeanor charge of cruelty to animals. She was also served with an outstanding arrest order for two old outstanding traffic charges. Investigator Barkley consulted with Animal Control. Because Barkley found “no apparent injuries or signs of neglect or mistreatment,” the dog was allowed to remain with Howell. This incident has happened only a few months after this was also done with electrical tape to another dog in Charleston, S.C. that is named Caitlyn. In that case, the dog’s muzzle had been taped shut so tightly that its tongue was caught between her teeth. This caused blood flow to her tongue to be stopped, according to the Charleston Animal Society. Since this time, Caitlyn has recovered. What do you think proper punishment should be for individuals charged with animal cruelty? Share this story with others and tell us what you think. [yop_poll id=”1″]