There are dog breeds that have been around for so long, many of the other breeds we have today were bred from these originals. Once, the American Kennel Club (AKC), referred to these dogs as ancient dog breeds. Today there are about 450 recognized dog breeds worldwide. Let’s learn more about these ancient dog breeds.

What is an Ancient Dog Breed?

Today, the breeds we will discuss are no longer referred to as ancient breeds. However, the AKC did refer to them as such because it was thought that these breeds were over 500 years old. However, there are reports that some dogs are not quite as old as we thought while others, like the Norwegian Elkhound, have origins dating back to over 5,000 years ago! Now that is ancient.

Breeds standards these days are controlled by kennel clubs, government bodies such as the Canadian department of agriculture, and registries, for the most part. Some clubs recognize one breed while others do not, so in that way it is somewhat subjective. Our list, outlined below, is also subjective.

Types of Dogs Considered to be an Ancient Breed

While this is not an exhaustive list, here are some breeds considered “ancient.”

The Afghan Hound originates in Afghanistan, and early history dates this dog as existing upwards of 8,000 years ago. They are hunting dogs used to catch large prey in the arid Afghan climate. In 1800, the breed was brought to England and exhibited at kennel clubs throughout the country. These independent and majestic dogs are lovely pets but aren’t much for snuggling. So, don’t get the Afghan Hound if you’re looking for an oversized lapdog. Their long hair requires lots of attention.

Alaskan Malamutes have East Asian origin and bred by the Mahlemut tribe of Alaska’s Norton Sound region, and share a close genetic relationship with the Siberian and Alaskan Husky. These highly intelligent dogs are used as sled dogs and kept as family pets. They are also adept at pulling and agility, and are therefore often used as show dogs. While the Alaskan Malamute is a fine pet and great with people, they need to be socialized well to behave around smaller pets and children due to their high prey drive. 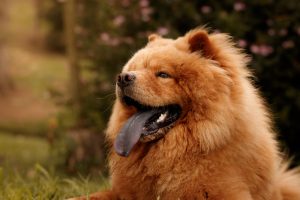 The Chow Chow hails from Northern China and earliest accounts, from art of the time, shows this dog being around from 150 to 200 B.C. The northern part of China is quite cool. Their name translates to “puffy-lion dog.” The breed is characterized by its mane of hair and black tongues. The Chow Chow has a reputation for being aggressive, but if owners socialize them young and often, they are quite loyal and behaved. Obedience training should be a priority. Celebrities such as Martha Stewart and Elvis Presley owned Chow Chows.

Saluki’s are from Egypt and are one of the 14 known breeds to be proven as one of the least divergent from wolves. Their origin can be traced back to 329 B.C. These hunting dogs were worked by nomadic tribes due to their speed and endurance. Modern versions of this breed are very similar to their ancestors. They are fast and great at hunting down prey such as goats, otters, foxes, raccoons, and even deer!

The Shar-Pei originates in China. They are known for their distinct face wrinkles and skin folds. Their short, rough coat protects them as they hunt or guard their owner’s home or farm. The Shar-Pei doesn’t do well with young children, so they are suggested for families with older children or single people. According to the Florida Chinese Shar-Pei Rescue, “During the Communist Revolution, dogs were outlawed in China and many were destroyed. The Shar-Pei almost became extinct. Luckily, the ancient breed was dramatically rescued by a Hong Kong businessman named Matgo Law, who appealed to Americans in 1973 through a dog magazine to save the Shar-Pei.” 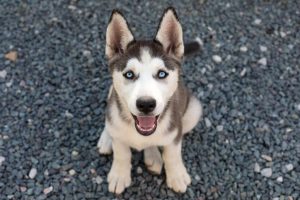 This ancient working breed had its beginnings thousands of years ago among the Chukchi people in East Siberia. This hunter-gatherer culture relied on this strong breed to pull their sleds and protect their people. This smart breed is energetic and used to working in cold climates. The Husky is known for its howl rather than their bark. Important to note, these dogs are demanding. Their intelligence means their owners have to work very hard to keep them stimulated. These were dogs meant to work hard, anything less will lead to behavioral issues.

There are so many more ancient dog breeds throughout the world. When you can, take time to discover more of them, including the Shiba Inu, Akita Inu, Samoyed, Finnish Spitz, and more!