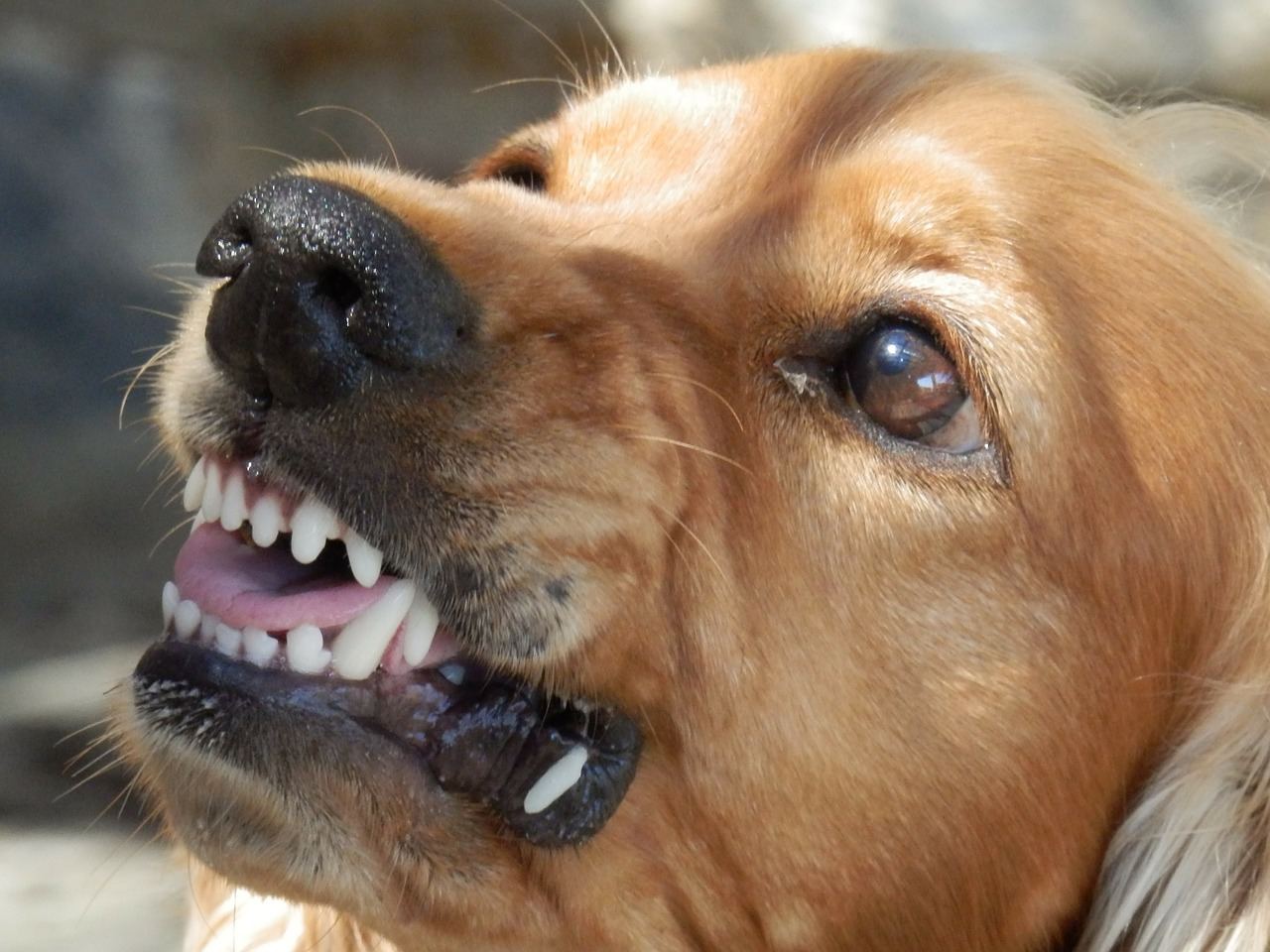 A dog baring its fangs, growling, or lunging is never a pleasant sight. Kevin Copeland knows all about that in the funny movie White Chicks!

It clearly establishes that the animal is aggressive by nature and needs to be treated and corrected accordingly. The moot question that now arises is: Why is it that dogs which are known to be man’s best friends and are so naturally compatible with human beings still choose to display aggression?

Illness: Illness is often a cause for aggression in dogs. Usually the pain is a reason for even the gentlest of dogs to turn cranky and this may be caused by brain tumors, rabies, and thyroid disease, to name a few. So should your otherwise well-behaved dog suddenly turn aggressive, consult your veterinarian to check out if it’s a health issue that’s causing it.

Fear: A fearful dog is generally an aggressive dog. Fear automatically triggers a self-defense mechanism, particularly when it’s backed into a corner with no escape route or a raised hand is perceived as an instrument of punishment rather than petting. A dog bites out of fear when all escape routes are closed, it’s being beaten, and it’s automatically looking for a way to defend itself.

Possession: A dog may be possessive about its food, toys, bed, or yard. They usually turn aggressive when someone approaches their food bowl or tries to pet them when he or she’s chewing on his or her favorite toys. It’s their way of saying, “Don’t mess with my personal possessions.” Canines also become aggressive when other dogs enter a home because it makes them insecure about the area to which they think they “belong” only. This territorial aggression is seen when the dog attempts to guard its personal space.

Establishing dominance: A dogs sometimes turns aggressive to establish its dominance. They firmly feel that they are “in charge” and the growling or snapping happen when it feels its dominance is under fire. This may happen when it’s being knocked off a chair, being forcibly restrained or being harnessed on a leash.

Frustration: Aggression arising from frustration is also called barrier frustration or redirected aggression. It happens when the canine is frustrated for being unable to get something, making him take out the frustration through a display of impatience or rage. This is also seen commonly in dogs that are kept chained or on leashes for long periods of time.

This is another reason why crate training is controversial at best.

Leash aggression happens when the dog on a leash greets another dog head-on and can’t turn its body. Since they tend to avoid fights, they tend to bark, lunge, and growl to eliminate the immediate threat posed by other dogs.

Moreover, as both dogs are on their respective leashes, they feel trapped because they are unable to increase the distance between each other. It is also a common tendency among dog owners to tighten their leashes, which enhances tension in dogs and increase their stress. The typical symptoms of increased stress in a dog are rapid pacing, increased panting, flattened ears, scratching and lowered tails.

Social aggression: In households that have more than one dog, there is no dominant or submissive dog. However, in some cases where leadership is claimed by more than one dog, a fight is likely to break out. This needs careful handling through rewards for polite behavior and suitable environment management.

Learned aggression: It’s an inherent part of dog psychology to repeat an aggressive act to get what it wants. For instance, if lunging and barking at the postman forces the latter to make a beeline for the door every time, the dog realizes that the act is effective. Similarly, they also tend to eliminate unwanted contact by making attempts to bite any hand that reaches out to pet them, thinking that it will make the hand go away forever.

Genetic predisposition: Some breeds of dogs like German Shepherds or Dobermans are genetically aggressive. They are also bred selectively to be aggressive and used for policing or defense purposes.

Protective aggression: Seen mostly in a mother trying to protect her newborn puppies.

Canine aggression is certainly preventable. Try and get the dog’s attention before taking him out. Call out his name, rewarding him for glancing at you. Start the procedure at home and move gradually to busier areas over time. However, make sure that you get his attention at any cost. By doing this, you’re actually teaching him to regard you in his own comfort zone.

Also, maintain a safe distance from other dogs when walking him. Wait till he notices his peers first, garner his attention, then reward him for it. This will certainly teach him to be more social with other dogs. Should he still lunge at other dogs, don’t punish him. This will undo all your efforts. Managing the dog’s immediate environment is also essential. In addition, don’t allow others to invade his space.

If you have to kick another dog away, then you may have to do that.

If you’re living in a busy strolling area, take the dog to an area where a fewer number of dogs are seen. If the dog is prone to harming others, it’s best to use a basket muzzle when he’s taken out. Moreover, you could hire a professional if you do not see any improvement.

Aggressive canine behavior is treatable through proper medical advice that only your vet can give (not your neighbor who just lost thousands playing fantasy baseball!). If hypothyroidism or neurological damage is its chief cause, then proper medical treatment based on the vet’s advice is essential.

For non-medical reasons, a professional dog psychologist may be consulted for a proper psychiatric evaluation, followed by long-term behavioral modification and medication, if necessary. It’s wrong to think that the dog will just grow out of this condition on its own because aggression is not only a serious problem but a persistent one―an issue that needs the appropriate treatment.

While undergoing behavioral modification, take care to limit the dog’s contact with outsiders, particularly children. Don’t ever assume that everything’s going to be fine unless it’s certified so. Also advise others not to try and pet it, even when your dog appears relaxed. They should only pet your dog if your dog comes to them.

It would also pay to keep it away from circumstances that frighten it suddenly (don’t let your dog watch Jurassic World since that movie was designed for kids, oh, sorry, that advice is only for dog owners!). The “no punishment” rule also works and simply removing him from a situation that upsets him will calm him down gradually. Remember, punishment in any form – physical or verbal – might worsen things and “bossing” over him could result in some serious consequences.

As long as the dog doesn’t overcome his aggressive behavior, keep him on his leash and provide plenty of exercising opportunities such as leash walks and Frisbee or ball-throwing to burn off their excess energy, so they know that you love them, and so they remain reasonably fit. Ultimately, it’s your constant attention, patience, and love for him that will help him overcome his negativities so he can turn a new leaf. But be warned that it won’t happen overnight.