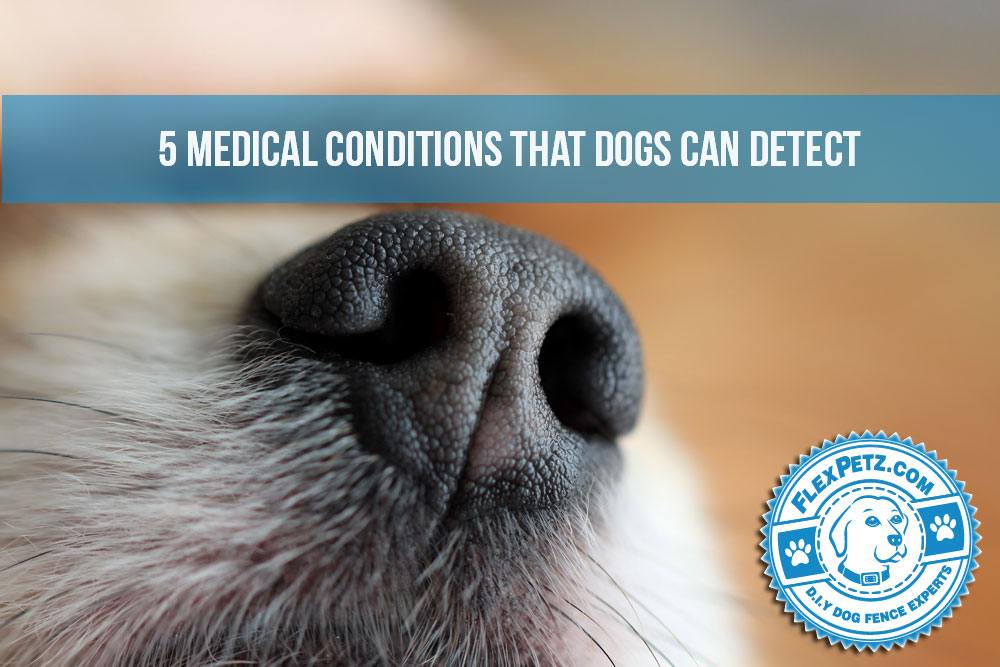 Dogs are wondrous creatures, particularly due to their keen sense of smell. Thanks to their 220 million scent receptors, dogs are able to smell things we can only imagine. Did you know that there are dogs who have been able to smell medical conditions before doctors were even aware of them? Dogs are able to detect the smallest of changes in the human body, from a small shift in our hormones to our cells releasing VOC’s, or volatile organic compounds that cancer cells release. It is just now becoming understood how dogs are able to do this, and how dogs can help medical science. Let’s take a look at different medical conditions that dogs are able to sniff out.

Perhaps you have already heard about dogs being able to detect cancer. The types of cancer that dogs have successfully been able to sniff out include skin cancer, breast cancer and bladder cancer. Studies that have been conducted in the past 20 years have involved dogs smelling samples to determine which ones have cancer and which do not. Through training, dogs are able to successfully find the cancerous samples. According to the InSitu Foundation, dogs can detect cancer even if it is in stage zero. They say this is because dogs are able to detect smell in parts per trillion. To give you an idea of what this is equal to, a dog could smell one drop of blood in 20 Olympic sized swimming pools.

People who have narcolepsy are not able to control when they fall asleep. Obviously, this could become dangerous if the person is walking or driving, for example. This is where service dogs come in. Through their keen sense of smell, they are able to sense subtle changes when a narcoleptic attack is coming on. Experts say that dogs are able to detect a narcoleptic attack 5 minutes before it happens. A 2013 study conducted by Luis Dominguez-Ortega, M.D., Ph.D., was designed to determine if a service dog could successfully detect narcolepsy patients. She found that 2 trained dogs were able to detect 11 out of 12 narcolepsy patients using their sweat samples. Service dogs can warn the owner by doing several things. They can stand over the person’s lap when an attack happens, which can stop the person from sliding onto the floor. If it happens in public, they can stand over the person or go get help.

People who get migraine headaches commonly experience symptoms ahead of time that may include neck pain, mood changes, frequent urination, yawning and food cravings. Psychology Today reports that 80% of migraine sufferers have these types of symptoms beforehand. A recent study conducted by the University of Pittsburg suggests that some dogs are capable of detecting subtle changes before any of these symptoms are even experienced. Out of the 1027 participants, 54% reported that they noticed changes in the behavior of their dogs, usually an hour or two before their migraines began. These changes in behavior include the dog refusing to leave the owner’s side, as well as persistent licking, lying by their side or staring at them. Why is it beneficial for migraine sufferers to know it is coming beforehand? Because the migraine medication can be taken before the person even has to suffer from it.

Dogs4Diabetics is a service that trains and places service dogs with diabetics who are dependent on insulin. These service dogs are able to let diabetics know when their blood sugar is spiking or dropping. Just by smelling their breath, the dog is able to alert the diabetic of these changes. Dr. Claire Guest, chief executive at Medical Detection Dogs explains the significance of detecting low blood sugar early on. She says, “People appear drunk before they collapse and then they’ll go into a coma and you’ve got to try and get sugar in their mouths.” According to a study conducted in 2013, diabetics who have a service dog to alert them of blood sugar changes significantly improves their safety and quality of life.

According to the Epilepsy Foundation, there are 2 types of dogs that can help a patient with epilepsy. Some dogs are able to recognize a seizure is coming and warn their owner. These are known as seizure alert dogs. The subject of seizure alert dogs is rather controversial. Some believe in their ability to detect seizures, while other medical professionals are not as confident. Seizure response dogs are trained to help patients who have just experienced a seizure. There is no argument that these dogs are helpful to their owners. More research is needed to reveal which seizure patients would benefit most from a dog’s assistance. It is still unknown how some dogs know a seizure is imminent. Is it behavior or body chemistry changes they are detecting? A greater understanding is needed. Nevertheless, according to Service Dog Central, “Approximately 15% of dogs are naturally able to predict seizures before they occur.