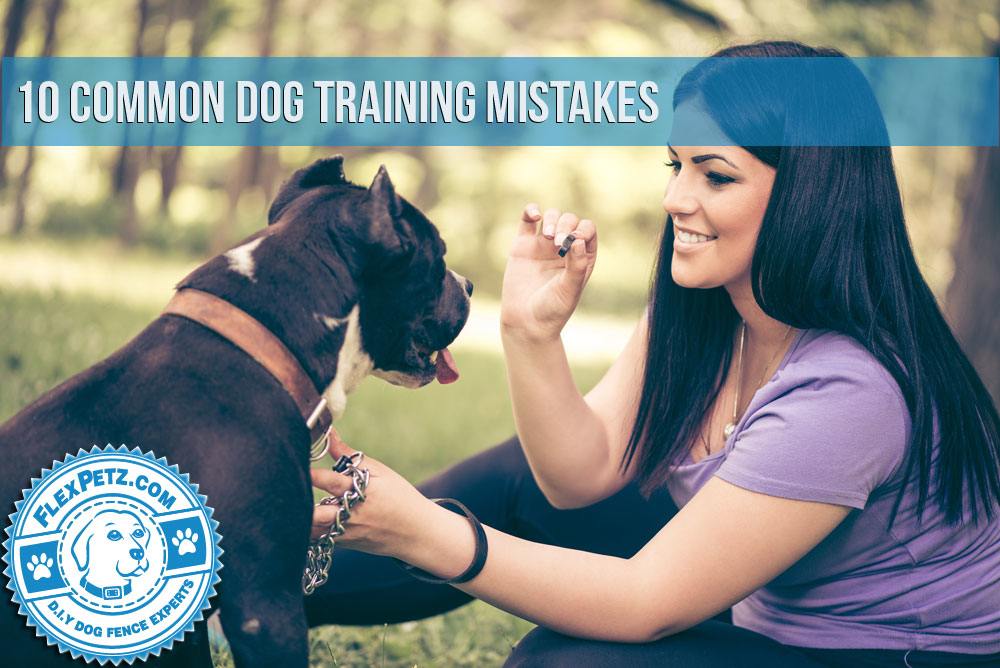 Dog training can be both a challenging and rewarding experience. Training helps to establish a closer bond with your pet. This is because a dog that is well-trained, obeys, is happy, relaxed and responsive is easier for you to manage. As a result, the relationship with your dog becomes more enjoyable. In addition to this, a trained dog is a safer dog. Trained dogs have a lower risk to themselves and others than an uncontrollable dog has. This is particularly evident in situations where your dog is in danger of being hit by a car. If your dog comes to you when called, this is an obviously positive impact of proper training. Many people have an idea of what to do to train their dog, through word of mouth or something they have read to do. However, there are several common dog training mistakes that can compromise the success of your dog’s training. Let’s have a look at 10 common mistakes that dog owners make when training their dog, according to Modern Dog Magazine.

When people get a new dog, they usually work at teaching them basic behaviors and routines. However, after they have had the dog for a while, they may not work on training them anymore. This may cause the dog’s response time to worsen, or for the dog not to respond at all. This dog simply needs more practice to stay successful at it. Instead of training the dog and then forgetting to continue later on, commands should be reinforced randomly and regularly, several times throughout the day. Teaching your dog a new trick once a month will help him to stay motivated.

Repeating the Command Over and Over

If the dog fails to sit when asked for example, the dog owner tells him 6 or 7 times. Eventually, the dog decides to sit. The learned behavior of stalling may be hard to break. This may also happen with strong-willed dogs who don’t want to lie down when commanded to. Instead of having to beg your dog to do what you want by asking them over and over, just ask them once. If they fail to do what you want, find a quiet spot and ask them again. If they do what you ask, it is imperative that you reward them generously for doing so. Lots of praise and food treats will teach them the benefits of obeying your commands.

The Training Sessions are Too Long or Too Short

The goal of proper training is to attain success, and reward it quickly. Spending too long trying to teach your dog too many tricks is only going to frustrate the both of you. Instead, as soon as your dog successfully completes a trick and receives his reward, the training session can be over. On the other hand, avoid ending a session until some level of success has been achieved.

Perhaps every time you teach your dog to sit, you are doing it in a quiet spot in your bedroom. Chances are, if you ask him to sit in your kitchen while you are banging around pots and pans, he isn’t likely to do it. To remedy this, begin by teaching your dog the command in an undistracted area. Next, gradually add distractions, such as the television or other people nearby. Then try the command after you have taken the dog outside. Then, you can move on to busier environments where you continue to reinforce the command.

Becoming Too Dependent on Treats and Not Enough on Praise

Treats are a great way to get your dog to do what you want him to do in the beginning. However, giving treats out liberally may work against you. Your dog’s focus and performance may slow down if they are always waiting for a food reward. Instead, once your dog has learned the behavior, replace the treats with praise or playtime. However, you can reward your dog with a food treat from time to time to sharpen a particular behavior.

Your Emotions Are Getting in the Way

For example, if you become angry, forceful or irritated when training your dog, this can be counterproductive. On the other hand, if you squeal with delight every time your dog follows a command, she may become too energetic to stay focused and obey. Instead of taking either of these incorrect approaches, you should display a laid-back, yet confident attitude energy that the dog will find calming.

Reacting as Opposed to Being Proactive

It is quite an art to know how to train your dog, which requires proper timing, technique and endurance. Inexperienced dog owners often react to what the dog is doing, rather than strategizing what to do. Instead of reacting to your dog’s behaviors, anticipate them. An example is a dog that barks excessively. Instead of waiting for the dog to start barking, when you think he might start barking, distract him toward another activity.

Let’s say your dog loves to jump on people. You let him jump on you when you come home from work, but when guests stop by, you don’t let him jump on them. This approach isn’t likely to work. Dogs need to know the rules and that they are supposed to follow them all of the time. Another example is if you are patient with your dog’s bad behavior one day, and the next day you scold them for it. This will cause your dog to become confused about how you are going to react to their actions. Simply set the rules, and stick to them.

Dogs are able to sense if you are not confident in their presence. Perhaps this is why people who are frightened of dogs get bitten more often than those who remain calm. If you don’t appear confident, your dog will take advantage of it. Taking a dog obedience class with your dog may help to remedy this. Practicing commands regularly with your dog will help increase your confidence.

Not Training Your Dog as a Unique Being

Each and every dog has its own unique personality and behavior. Breed is part of the picture, but a dog’s individual character must be taken into consideration before training can be successful. Part of this is determining what training methods will work best with your dog. For example, if your dog is shy and you act too aggressively, this isn’t the right approach. On the other hand, if you have a strong-willed dog and you command them gently, they might not pay you any attention. A dog’s size, age, energy, breed and history should all be taken into consideration. When it comes to training your dog, WebMD sums it up when they say, reward your dog for the behaviors that you like and make sure the behaviors you don’t like aren’t ever rewarded.